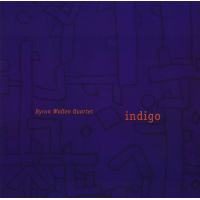 Through an Afro-American heritage of more than three hundred years, jazz was born of blues, spirituals, children's lullabies, ring games, work songs and other sounds of American culture. The blues and the spirituals belong to an older indigenous music whose sound can be heard from all corners of the globe. Music as a reflection of environmental and biological sounds has always been a vital part of human existence. Indigo is the timeless sound of this existence. The cohesive blend of trumpet, baritone saxophone, bass and drums weave complex rhythms with flowing melodies to evoke sounds of the soul. The inspiration for the music comes from the deepest parts of the Central African rain forest, the remotest parts of Papua New Guinea and Indonesia, the early music of Europe as well as the more obvious influences of jazz, funk, drum and bass and blues. Indigo is a colour, an experience and many moods. "A fascinating set of his own pieces reflecting the influence of various strands in the evolution of black music … the effect is mesmeric." – JAZZ UK "A timeless album … it's as tasty as an organic loaf, fresh out of the oven …" – THE GUARDIAN "Wallen cleverly incorporates the most modern musical techniques of sampling sounds with such ancient instruments as the ocarina, shells and the gamelan." – BIRMINGHAM POST "On Indigo his quartet creates a joyous head of steam. Odd time signatures abound but Wallen remains funky and accessible …" – THE TIMES "Byron has returned with his most convincing disc to date." – THE SCOTSMAN "The trumpeter's compositions reflect his love for both traditional ethnic music, contemporary dance and funk as well as the jazz which lies at its heart." – JAZZWISE

All About Jazz musician pages are maintained by musicians, publicists and trusted members like you. Interested? Tell us why you would like to improve the Indigo musician page.