Melissa Morgan is a newcomer with an old-school pedigree. Her earliest exposure to jazz was by way of her grandmother’s record collection when she was growing up. Some of the first jazz voices she ever heard from among those old LPs �” Billie Holiday, Dinah Washington, Sarah Vaughan, Nancy Wilson �” were also some of the greatest.

Two decades after first hearing those classic voices, Morgan’s tastes still run to that heyday of the great jazz divas. Her debut recording, “Until I Met You” for Telarc, captures that organic, old-school sensibility and reintroduces it to an entirely new generation of listeners.

Melissa Morgan was born in New York City and grew up in Teaneck, New Jersey. She began studying piano at age four. During high school Melissa began singing with local choirs and was soon performing with select classical vocal groups across the country and abroad. A highlight of her choir experience was a seven-country tour of Europe in 1996 with the U.S. Youth Chorale. As a student Melissa was recognized with numerous awards including 3 gold cups in the New Jersey Federation of Music solo piano competition, top ranking in the New Jersey all-state choir, and runner up for the New Jersey Governor's award for vocal music.

Outside of school, she furthered her studies with renowned choir director Dr. Maredia Warren and soprano Katherine Harris of the Metropolitan Opera. Melissa's love of jazz blossomed upon her discovery of classic recordings by Billie Holiday, Dinah Washington, Nancy Wilson and Sarah Vaughn.

In 1998, she entered SUNY Purchase Conservatory of Music and studied with many prominent artists including Yolande Bavan of jazz vocal group, Lambert, Hendricks & Bavan, Jon Faddis, Mark Murphy and Roseanna Vitro. While attending Purchase, Melissa appeared with the conservatory's Jazz and Latin Jazz Orchestras and was featured vocalist with the Purchase Jazz Band during a 1999 tour of Spain. In May 2002, she received a B.A. in jazz vocal performance.

Since graduating from Purchase, Melissa has been a regular performer at some of New York's top jazz room such as Cleopatra's Needle, Flute, G Bar, Smalls, Smoke and St. Nick's Pub. She has appeared with her own trio as well as other artists including Harold Mabern, David Hazeltine and Sam Yahel. In 2001 she was featured in performances with Jon Faddis and the Dizzy Gillespie Alumni All-Stars at the Blue Note in New York. Melissa performed at the 2002 New York Women of Jazz Festival at Smoke jazz club, and that same year was a guest on the Metro TV-NY program “Where to hear jazz in New York City”.

In September of 2004, she was named a semi-finalist in the Thelonious Monk International Jazz Competition in Washington D.C., the most prestigious jazz competition in the world, hosted by Billy Dee Williams and Herbie Hancock. Judges for the competition were luminaries Quincy Jones, Al Jarreau, Kurt Elling, Jimmy Scott, Dee Dee Bridgewater and Flora Purim. The Thelonious Monk International Jazz Competition has launched the careers of a number of major young jazz stars.

Melissa has managed her own developments as a jazz singer and has quickly risen to heights unexpected for one so young. She has recently relocated to Los Angeles, California to begin a recording career and to extend her jazz audience throughout the west coast. Show less 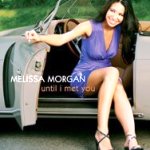 Until I Met You

All About Jazz musician pages are maintained by musicians, publicists and trusted members like you. Interested? Tell us why you would like to improve the Melissa Morgan musician page.