Tenor Saxophonist and composer Michael Webster manages to reside comfortably in the crease of New-York-style instrumental improvisational music while maintaining an eclecticism and sincerity all his own. The same can be said of Webster as of his contemporaries Dave Douglas and Vijay Iyer – that he is not merely a musician but a facilitator of musical collaborations in whole greater than the sum of their parts and that he truly plays not only the horn, but the band.

A native of Ottawa, Canada, and son of a University of Ottawa music professor and a National Arts Centre Orchestra of Canada violist, Webster releases his second solo album, Momentus, this year. His first, Leading Lines, received round praise for its sophisticated take on accessible material. Webster is known for his love of Afro- Latin music and extensive collaborations with some of its most luminary exponents, including William Cepeda, Arturo O’Farrill, and John Benitez, and the influence is audible in Leading Lines. Momentus exhibits elements of Webster’s trademark style, but is notably different, building upon the artist’s experience in the intervening years.

Webster, whose initial move to New York City was made possible by a $20,000 J.B.C Watkins Award from the Canada Council for the Arts, graduated from Manhattan School of Music in 2004. The same year he had begun collaborating with legendary trombonist and percussionist William Cepeda, who recognized Webster’s particular genius for fleshing, transforming, and orchestrating basic melodic kernels, and hired him to arrange for and play saxophone in his band, which toured Puerto Rico in April and May of 2004. In 2009 Cepeda and Webster produced Posesión, a concert length piece for big band and strings adapted from Cepeda’s ideas.

In 2006 Webster released his first solo album, Leading Lines, which featured Grammy-winning bassist John Benitez, and drew heavily on Webster’s Latin Jazz influence. The record showcases nuanced and surprising takes on Webster’s characteristic lyrical melodies, brought to life by a variety of ensembles ranging from duo to nonet and encompassing a range of moods from brash big-band shout choruses to tender string swells. Of Leading Lines, pianist Garry Dial wrote, “the orchestrations are exquisite. The use of strings, woodwinds and brass evokes the genius of Gil Evans and Maria Schneider.”

Re-appropriated from album title, Leading Lines became the name of Michael’s 17-piece working large ensemble, which in 2010 gave a concert at New York City’s iconic Saint Peter’s Church, featuring legendary alto-saxophonist Dick Oatts. In the same year, Webster won his third grant from the Canada Council for the Arts, and arranged a work for 75 musicians for the New York Jazz Academy that was performed in Carnegie Hall. 2011 saw Webster beginning to lead a small ensemble, the Michael Webster Quintet, in performance at venues around New York. The group was featured at All Night Soul with famed Canadian trumpeter Ingrid Jensen in an incarnation that eventually recorded Momentus, Webster’s second album, at Systems Two studios in Brooklyn.

Momentus is notable as a departure from the genre-based music of Leading Lines, into stream-of-consciousness storytelling and ambitious long-form explorations. Webster plays nimbly with the textural and orchestrational options his unconventional six-piece ensemble allows, featuring Ingrid Jensen’s trumpet and Chris Dingman’s vibes, and stretches the possibilities of form. What will likely endear this album to casual listeners and critics alike, though, is the strength and clarity of its thematic material. Central to Webster's work, and lending it a universality and catharsis transcendent of its instrumental setting, is the feeling that the tune has absolute primacy.

Webster lives in Brooklyn, New York, and continues to compose, perform and tour with both his own groups and as a sideman.

“Michael Webster has produced a beautiful CD of original music. His ideas as a composer and saxophonist are heartfelt and clear. Keep an eye on him!”

“The orchestrations are exquisite

“Michael Webster has produced a beautiful CD of original music. His ideas as a composer and saxophonist are heartfelt and clear. Keep an eye on him!”

“The orchestrations are exquisite. The use of strings, woodwinds and brass evokes the genius of Gil Evans and Maria Schneider, while remaining true to a unique and personal voice. It is difficult to make a fully orchestrated and arranged large ensemble CD without losing the essence of the jazz soloist's improvisation. Once again, here Michael hits a home run. His saxophone solos would stand alone powerfully in the jazz quartet even without the beautiful orchestrations behind him.” —————————————————————————————————— TAXI - The World's Leading Independent A and R Company, on “Horizons”:

“The track sounds amazing... a first rate ensemble, with all the players contributing strong performances. The multifaceted scoring is quite impressive, especially the intriguing textures achieve[d] between the string[s] and traditional jazz instruments. String voicings and articulations in the lyrical interlude are wonderfully evocative...solo sounds excellent as well.”

Taught private lessons for 10 years in saxophone, composition, arranging and Finale. On faculty at the New York Jazz Academy since 2009. 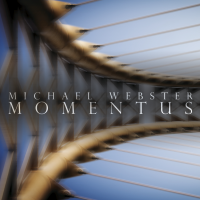 From: Momentus
By Michael Webster

From: Momentus
By Michael Webster

All About Jazz musician pages are maintained by musicians, publicists and trusted members like you. Interested? Tell us why you would like to improve the Michael Webster musician page.