Michelle Walker is a New York City based jazz vocalist, arranger and educator with an international resume of concert and festival performances, including 7 tours in Russia, a 10-day tour in Israel with one of the performances at The Tel Aviv Musuem of Art being broadcast live on national radio as well as concerts in London and Amsterdam. Other performance highlights include The Lincoln Center-Women in Jazz Festival, The Silver Spring Jazz Festival and live jazz performances throughout the US. Michelle studied privately and attended masterclass with a number of teachers including Betty Carter, Mark Murphy, Rhiannon and more.

Michelle is often compared to Cassandra Wilson, Nina Simone and Betty Carter in style and tone. She has opened in concert for Wynton Marsalis, Rene Marie, George Benson and Mark Murphy. Her arrangements of straight-ahead standards and contemporary pop tunes blend genres effortlessly. Critics have noted that she has a singular voice with a high level of originality that is solidifying her own distinctive sound. Dave Nathan at AllAboutJazz.com says, “Walker demonstrates an extraordinary degree of musicality.” According to Mike Joyce of the Washington Post, the hypnotic, sexy, deep tone of Michelle's voice has a “soul-comforting allure”.

Vocalist Michelle Walker Returns To Russia For An Extended Tour As A...

“A tone like this is born only once in a generation....”
Jazz-Not-Jazz, Germany

“[Walker]....has extraordinary musicality....weaving deftly through complex rhythms....”
All About Jazz 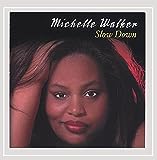 All About Jazz musician pages are maintained by musicians, publicists and trusted members like you. Interested? Tell us why you would like to improve the Michelle Walker musician page.