Farther Up The Road

“Farther On Up The Road” was the first song I heard by Bobby. I heard this song in Liverpool in a club called Eric’s, and the manager of the club was a guy called Roger Eagle who was a huge Bobby Bland fan, and he in fact managed my first band the Frantic Elevators for two years. Roger was probably my biggest musical mentor and I discovered a lot of music through Roger.

Ain’t That Lovin’ You

I first heard a live version, actually, of Bobby Bland’s and what I like about this version is this rolling baseline that we have on Andy’s arrangements. It’s very groovy and I love the horns inside the chorus, it’s a very groovy and funky track and I think we’re really going to enjoy playing this one live.

I’m Too Far Gone (To Turn Around)

“Too Far Gone” is really a very unusual song, it’s one of those songs that doesn’t have a verse or chorus or anything, it just really seems to roll along and it’s got interesting twists and turns to it and we really tried to give a contemporary feel to a song which I think is very oriented in gospel.

“Poverty” is the first single from the album “Tribute To Bobby” and it has a very powerful lyric that really, in many ways, can apply to the current situations in society as it did all those years ago when Bobby first recorded it. I feel it’s somehow still quite relevant to many people. I was brought up in a life of poverty, but fortunately I am successful and wealthy now, but that still doesn’t mean to say you can forget or just ignore what you’ve been through in your own life in the past. I am fully aware that there are many people out there who are experiencing these problems now. I really love the lyrics on this tune, a great groove, and Bobby sings the hell out of it by the way on his version. It’s a really enjoyable song to sing and a great lyric

This has a wonderful and funky groove; I really think this is going to be amazing live. The lyrics are really quite disturbing; it’s about a woman who steals a man’s heart. This man is happily married with a young child, and she leaves him and it’s quite a tragedy really. I enjoy the tragedy but I enjoy the funk a little more.

“Stormy Monday Blues” is really a classic blues anthem, probably one of the greatest blues songs ever written. Bobby’s version is very slow and typically bluesy and what we tried to do again with this track is to give it a modern edge with a much quicker faster groove, more jazzy, and just make the thing extremely funky. Again I think this is just going to be wonderful to be playing live.

I Wouldn’t Treat A Dog (The Way You Treated Me)

The next track for you is “I Wouldn’t Treat A Dog” which has a slightly more seventies feel to it. To me it reminds me of something recorded at High records maybe an Al Green or Syl Johnson track. And the lyrics are really quite sad, you know, that a guy is being treated so bad and he says you wouldn’t treat a dog the way you treated him, and I don’t know I felt like going ‘woof woof” occasionally on this track when I was singing it…but I didn’t.

I’ll Take Care Of You

I don’t know why but I have this strong sense of an Irish melody here on this tune, it’s got the most beautiful lilt to it and it somehow reminds me of Irish music and it’s almost folky. I love the opening lines as well: “I Know you’ve been hurt by someone else, I can tell by the way you carry yourself”. It’s really quite poetic and beautiful. A particular favorite, I love Kenji’s guitar playing on this tune as well, it’s very nice.

This song was apparently written by the late Ahmet Ertegun, whom I knew, and I was good friends with his brother Nesuhi Ertegun, the co-founders of Atlantic Records. So in a way this reminds me of my past history and being friendly with both Nesuhi and Ahmet. It’s a beautiful song and quite a challenge singing it because it’s quite a difficult song to sing. My favorite part of the song that seems so vivid to me is where it says, “It’s three o’clock in the morning and the moon is shining bright”. Somehow I just visualize that so well.

I Pity The Fool

We tried to give a real contemporary flavor to this song with a heavy pulsating base. And I love this track because it is so dark and moody. We managed to infuse gospel with a contemporary sound and I think this is one of the successful tracks on the album.

“Cry, Cry, Cry” is a bittersweet love song where you seem to want somebody else to suffer. I’m kind of glad I didn’t write this song because somebody would think I’d be very bitter. Fortunately I’m not so bitter. This is a great song; Bobby’s version is absolutely amazing. Again, loaded full of gospel intonations and it’s really going to be quite a groove on the stage. I like particularly the horn melody that Andy Wright came up with on that one.

The final track on the album is one of my favorite tracks that I call to my friends casually the Immigrant Song. The song is called “Lead Me On”. It’s very much a feeling about a stranger in a strange town or a strange homeland, and how they feel insecure and unsafe and how they need help and they need someone to lead them on through in this unfriendly land. I wonder if it has particular resonance with the nation of immigrants of the United States. And perhaps will have even deeper meaning to the people in the United States. I love this song; it’s the last track on the album. There you have it “Tribute To Bobby”. I am very proud of this work and very proud to know Bobby and very proud to consider him a friend. I really enjoyed the songwriting on this album, and it’s really great material. 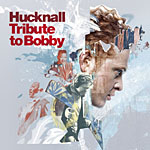 All About Jazz musician pages are maintained by musicians, publicists and trusted members like you. Interested? Tell us why you would like to improve the Mick Hucknall musician page.