Mike's jazz fusion compositions have begun attracting attention from many well-known national artists. Becoming a cancer patient in 2008 was the big wake-up call that got him to start writing lots of new music, form a band, start booking gigs, and pursue his dream of becoming a professional jazz musician, inspired by fellow cancer survivor Lance Armstrong. Mike raised over $10,000 on kickstarter.com in 2010 to fund his first studio album “A Stitch In Time” featuring Damian Erskine, Reinhardt Melz, John Nastos, Brandon Woody, Rafael Trujillo, Patrick Lamb, Tim Jensen, and Paul Mazzio, produced by Emmy award-winning David Mathew. This studio album and band is also being featured on the Oregon Public Broadcasting (OPB) Oregon Art Beat television show. Mike currently resides in Portland, Oregon and enjoys playing with some of the finest musicians in town who are up to the task of performing his extremely challenging but accessible compositions.

The Mike Prigodich Group (a.k.a. MPEG - the Melz/Prigodich/Erskine Group) features the best original jazz fusion to come out of the Northwest with some of the best players in the Northwest. Mike Prigodich on piano is joined by the blow your mind rhythm section of master drummer Reinhardt Melz, bass virtuoso Damian Erskine, along with the superb tenor sax work of John Nastos. If you enjoy the music of Chick Corea, Return To Forever, Yellowjackets, Michael Brecker, Hiromi, etc., you'll love the fusion compositions of Mike Prigodich combining Jazz, Prog Rock, Afro-Cuban, Latin, Brazilian, Flamenco, Funk, as well as world music influences from the Middle East, Africa, Ireland, etc.

The 1990's saw Mike performing regularly with the Michael Newmark Orchestra, a 9-piece wedding band in the Chicago area. Mike also performed in a jazz quartet, once opening for Lou Rawls. After moving to Portland, OR in 1998, he performed briefly with a live band for Tapestry Theater's 2001 premier production of 1941 Christmas From Home, a WWII- era live radio style show. This was followed by a long hiatus from performing much in public due to the demands of his day job and family life.

Becoming a cancer patient in November 2008 was a big wake-up call and the perfect motivator to get him to stop procrastinating and start writing lots of new music, form a band, start booking gigs, network with other musicians, and most of all, experience the joy of playing great music. He was treated by Lance Armstrong's oncologist, Dr. Craig Nichols. Mike decided that if Lance Armstrong could go on to win the Tour de France as a cancer survivor, then he could pursue his childhood dream of becoming a professional jazz musician.

Mike currently leads the Melz/Prigodich/Erskine Group (MPEG) featuring Reinhardt Melz on drums and Damian Erskine on bass with John Nastos on saxophone making guest appearances on larger gigs. Mike recently recorded and released his debut album “A Stitch In Time”. All of this has been in his spare time, since Mike still works a full-time day job in the software industry to support his family.

Damian Erskine is not your ordinary bass player. While not touring, Damian hones his chops with some of the best jazz and latin musicians the West coast has to offer. Damian is known for his ability to fit into any musical situation and his extraordinary reading and improvising skills.

Whether playing as a sideman or with his own group, he is known for his rock solid bass work, virtuosic solos and thoughtful chordal abilities. Damian is also an adjunct professor at both Portland State University and Marylhurst University. He is also the nephew of drummer Peter Erskine.

Drummer Reinhardt Melz is by far the busiest drummer in the Portland area. While working nearly every night as most people's “first call” drummer, Reinhardt also keeps a busy touring schedule with pop icon Gino Vannelli. Hailed as one of those rare guys that can play any style with authority, Reinhardt really shines in every setting. Having gigged since before he could drive, Reinhardt has worked with Gino Vannelli, Curtis Salgado, Charmaine Neville, Buddy Guy, Lloyd Jones, Bobby Torres, Victor Little, Reggie Houston, Allen Hinds, Patrick Lamb, Ernestine Anderson, Randy Porter, Tony Furtado and many, many more.

Reinhardt Melz has been on the North West professional music scene since 1987. He is a consummate musician and teacher. He is also Bobby Torres’ eldest son.

Reinhardt prefers not to categorize music. Instead, he strives to play what the music calls for. He is a versatile drummer that is recognized for his talent in creating sophisticated rhythmic conversations. He is a “top-call” drummer who is in demand for work with artists of many different genres ranging from Jazz and Afro-Cuban to R&B, Rock-n Roll, Funk and Klezmer.

Multi-instrumentalist John Nastos was born and raised in Portland, Oregon, where he found his love of music while exploring the vibrant local music scene.

Before graduating from high school, John enrolled at Portland State University, where he studied with Alan Jones, Darrell Grant, and other Portland jazz luminaries. During that same year, he started performing with the Mel Brown Septet, the Gordon Lee Big Band, and other professional Portland groups.

Since returning to Portland, John has performed with the who’s who of the Portland scene, including the Bobby Torres Ensemble, the Portland Soul All-Stars, the Third Angle New Music Ensemble, Darrell Grant’s On the Territory, and the Damian Erskine Project. He has recorded with Intervision, Ben Darwish’s Commotion, the Drew Shoals Collective, and others.

Recently, Nastos’s composition, arranging, and compositional skills have been commissioned for performances and recordings by Damian Erskine, the Bobby Torres Ensemble, the Art Abrams Swing Machine, and Pink Martini (for performances with the San Francisco Symphony).

Nastos maintains a busy performing, recording, and teaching schedule around the Portland area. He is also currently part of Diane Schuur’s touring group, playing performances around the world.

”I knew this guy was up to something; what a great disc! Beautifully written and played with passion and intensity by an excellent band. This is one of those CDs that you want to hear again as soon as it's finished. Bravo Mike!” -- George Whitty (Brecker Brothers)

“Watch out for this guy! Mike is terribly brave, adventurous, playful, and adept. As his compositions and playing demonstrate, Mr. Prigodich is a rising talent following his creative muse fearlessly to wherever it takes him. Kudos Mr. P!” -- David Goldblatt (Tribal Tech)

“This is band is top shelf; they were super tight and super exciting.” -- George Colligan (Jack DeJohnette New Quintet)

All About Jazz -- “Prigodich is an excellent keyboardist, but it's his writing that really stands out

”I knew this guy was up to something; what a great disc! Beautifully written and played with passion and intensity by an excellent band. This is one of those CDs that you want to hear again as soon as it's finished. Bravo Mike!” -- George Whitty (Brecker Brothers)

“Watch out for this guy! Mike is terribly brave, adventurous, playful, and adept. As his compositions and playing demonstrate, Mr. Prigodich is a rising talent following his creative muse fearlessly to wherever it takes him. Kudos Mr. P!” -- David Goldblatt (Tribal Tech)

“This is band is top shelf; they were super tight and super exciting.” -- George Colligan (Jack DeJohnette New Quintet)

All About Jazz -- “Prigodich is an excellent keyboardist, but it's his writing that really stands out. There is a liveliness and emotional connection to much of this music that makes it immediately endearing. His band is tight and funky, with an ability to groove that puts many better-known fusion outfits to shame.”

Audiophile Audition -- “What do Chick Corea and Spinal Tap have in common? That would be Portland keyboardist Mike Prigodich.”

No Treble -- ‎”The album’s intriguing melodies, odd time signatures, and ear-bending harmonies make it a stand-out album in the world of fusion.”

The Virginian-Pilot -- “11 musically adventurous/challenging tracks that are, at times, mind-boggling in their intensity.”

Inside MusiCast Album Of The Day on Monday, June 13, 2011 -- “A tour de force that would certainly get the respect of Prigodich’s muse Chick Corea. In the tradition of The Yellowjackets, The Brecker Brothers, Hiromi and others, the 11 tracks on A STITCH IN TIME cover a vast fusion landscape of complex proportions that’ll have you wondering how an artist like Mike Prigodich could ever consider sitting on the sidelines. The entire project is an incredibly satisfying ride.”

All About Jazz -- “Prigodich speaks a musical language all his own, one born of a voice that elevates his instrument far beyond its realm into one where mystery and magic meet.”

Sea Of Tranquility -- “Prigodich infuses every second of his debut album [with] style, grace, and wonderful musicality. [His] affirmation for life comes through with every note, and the album feels like a celebration of music.” 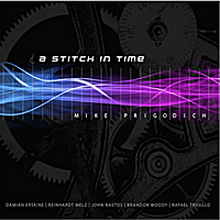 A Stitch In Time

All About Jazz musician pages are maintained by musicians, publicists and trusted members like you. Interested? Tell us why you would like to improve the Mike Prigodich musician page.