“At the risk of making Mike Turk's conception sound easily won, which it was not, or his music lazy, which it most definitely is not, I can't help noting at the outset how effortless this collection sounds. Perhaps the harmonica just conjures images of huffing and puffing, or the ingenious tribute to Dizzy Gillespie on “Lover” / “Diggin' for Diz” created expectations of pyrotechnics. What we get, though, is music where the ideas and the swing are unforced, where everything flows with such assurance that one forgets that Turk plays one of the jazz world's miscellaneous instruments and simply hears his harmonica as a lead voice, comfortable and in-place as the more familiar trumpet or sax.

Turk, who admits to having listened to Gillespie for years, without “really trying to get into Dizzy's thing” traces his own approach to two specific individuals. “You hear a deep connection in my music to Toots Thielemans and to Lester Young. Phrasing is a matter of how you think, and of not playing everything you know all at once. I've heard this said numerous times from every legendary horn player who is asked....It's a Dexter [Gordon] thing, and Dexter was a Lester Young guy. I just try to lay back like Lester and play some nice lines.” “I think of Lester when I hear many of these tunes,” Turk continues, “including “Prey Loot,” because Lucky (Thompson) comes out of Lester, too; and “Nobody Else But Me,” which I heard recorded by Stan Getz, another deep Lester guy.”

This emphasis on the Lester Young school of saxophone players does not diminish Turk's appreciation for the reigning harmonica voice in modern jazz. “Toots Thielemans is the guy who showed me where I could come in, where the harmonica fits as a jazz instrument,” he declares, “and I like the way he just comes out and makes a statement musically, rather than having to prove what he can do in each solo...”

One can imagine the obstacles that confront a harmonica player determined to play jazz; but one does not hear those obstacles reflected in Mike Turk's music. On the contrary, the mood here is comfortable. like those soft shoes Turk's idol Lester Young preferred. And like those shoes, Turk's Works can't help but make you feel better when you slip it on.”

Excerts from Ira Gitler's liner notes for up coming release “THE ITALIAN JOB” from MIKE TURK In the May issue of Jazz Improv NY (before it morphed into Jazz Inside NY) I wrote about Mike Turk’s The Nature of Things, naming it CD of the month and recognizing Turk as “someone who has flown under my radar—and apparently a lot of other people’s, except perhaps in his home city of Boston...Mike Turk makes the harmonica sing and swing like a masterful saxophonist...” I was also taken by his choice of material that included songs by Jimmy Raney, Elmo Hope, Johnny Mandel and Irv Rochlin that don’t show up that often, and material from Ellington, Gillespie and one of his own. It isn’t every day, especially these days that the real deal comes along seemingly out of the blue.

Turk was born in the Bronx, NY in 1951, son of a bassist/vocalist. In 1967 he took up harmonica and was soon influenced by the Chicago bluesicians—first Paul Butterfield into James Cotton, Little Walter and John Mayall. In the summer of 1971 he headed up to Boston with a folk guitarist, living and sleeping on the stage of George Papapdopolis’ Unicorn Coffee House. “After that,” he says, “Boston and New England was my ‘oyster’ as a folk and blues player. All that ended when I first heard Toots’ (Thielemans) 1957 Riverside recording of Man Bites Harmonica. I knew then I had to go to Berklee (Berklee College of Music) and study jazz on the chromatic harmonica. I lost a lot of gigs and contacts because I switched ‘bags’.” While at Berklee he was awarded two National Endowment Jazz Fellowships. One was to study with Thielemans but Toots, due to his heavy performing obligations couldn’t follow through. Mike wound up studying with noted saxophonist Jerry Bergonzi. Mike’s second Fellowship was awarded by the NEA because they were impressed by his progress. It gave him a chance to continue with Bergonzi, who says of him: “Mike Turk has applied the language of the saxophone to the harmonica in a very impressive fashion...it amazes me.” Thielemans was no less impressed and chimed in with “Mike Turk is a no-nonsense musician and the harmonica is his life...his home base is bebop with a healthy swinging approach. He shows familiarity with some interesting melodic scales...he makes a harmonica statement that should reach out beyond the harmonica audience...Turk is a fiery player who came out of the bluesharp and assimilated the chromatic quite fluently... knows his changes and aims for swing. Go for it Mike!” In the late ‘90s Turk began to visit Italy and interact with its musicians. In 1998, 1999 and 2000 he toured backed by a group called the Alkaline Trio, eventually recording a CD for a small German label. He stayed in touch with two of the musicians of that trio, Alessandro Di Puccio and Alessandro Fabbri, both from Florence. ......... I was familiar with only one of the quartet who collaborated with Turk in this CD. That would be pianist Paolo Birro. ..... Bassist Paolo Ghetti also joins the group. ...

The Italian Job contains two of Fabbri's pieces. The group’s repertory is not your usual roster of tunes (American Songbook or jazz standards) but a varied mixture that ranges from “Old Man River” to Gabriel Faure’s “Pavane” and Hank Mobley’s “Funk in Deep Freeze.” Turk’s lambent intro and some mallet strokes from Di Puccio herald Fabbri’s yearning “Neptune” that swings into gear with Birro’s solo on electric piano (his other use of current occurs on “Funk in Deep Freeze”) followed by Mike surfing the waves. It’s lighter than air but with substance. Turk’s take on “Old Man River” is deep into the blues feeling at a deliberate, slow-drag groove. Di Puccio rings his bells on the bridge and Mike finishes the theme before taking off downstream with steam. George Shearing’s “Conception,” as first recorded by his quintet, was not only popular with his fans but it also perked up the ears of his peers. Miles Davis recorded this with his Nonet, later dubbed “The Birth of the Cool” band. Turk makes extensive, and varied, use of the interludes Davis introduced with the Nonet and which Miles continued to use in his subsequent smaller groups. It isn’t until late in the piece that Shearing’s original bridge surfaces and it’s a beauty. Everyone in the quintet gets a shot in the spotlight. Gone but not forgotten is Hank Mobley, tenor saxophonist and writer. “Funk in Deep Freeze” is not one of his best-known tunes but it has a welcoming feeling that brings forth warm interpretations. ........................................................ Mike reaches back to the earlier part of his career for the story of an itinerant musician. It’s a blues with his lyrics and vocal. The “Maxwell Street” of the title refers to the location that was the heart of where the great Chicago blues men were situated, Muddy Waters et al. His unpretentious singing has a tang to go along with the narrative of the deep blues pouring out of his “tin sandwich.” ................ The Italian Job was a film with Michael Caine about some Brits pulling off a gold heist in Italy. In Turk’s version he and the Italians deliver the gold, in notes, to you. Ira Gitler (July 2010)

Read more articles
”Mike Turk has applied the language of the saxophone to the harmonica in a very impressive fashion . . . it amazes me.” Jerry Bergonzi

”. . . It's not surprising to learn that Mike Turk was originally a blues player and started using chromatic harmonica only afterwards, for the blues is there in every note. His style owes a lot to Toots Thielemans, but it's more sober, also more joyful. This album swings from beginning to end . . .” LeJazz Magazine,

“Mike Turk is a no-nonsense musician and the harmonica is his life. [He is] one of a rare breed who started out with the blues harp and went on to get an enviable technique on the chromatic

”Mike Turk has applied the language of the saxophone to the harmonica in a very impressive fashion . . . it amazes me.” Jerry Bergonzi

”. . . It's not surprising to learn that Mike Turk was originally a blues player and started using chromatic harmonica only afterwards, for the blues is there in every note. His style owes a lot to Toots Thielemans, but it's more sober, also more joyful. This album swings from beginning to end . . .” LeJazz Magazine,

“Mike Turk is a no-nonsense musician and the harmonica is his life. [He is] one of a rare breed who started out with the blues harp and went on to get an enviable technique on the chromatic. His home base is bebop with a healthy swinging approach. He shows familiarity with some interesting melodic scales. [He makes] a harmonica statement that should reach out beyond the harmonica audience. . .Turk is a fiery player. . . . came out of the bluesharp and assimilated the chromatic quite fluently. . . . knows his changes and aims for swing! . . . !” Toots Thielemans

“He plays it with so much ease and facility that one would think he were playing a saxophone.” Joe Hunt jazz drummer. 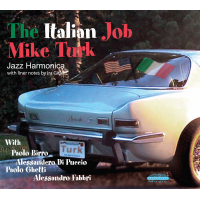 The Nature Of Things

All About Jazz musician pages are maintained by musicians, publicists and trusted members like you. Interested? Tell us why you would like to improve the Mike Turk musician page.