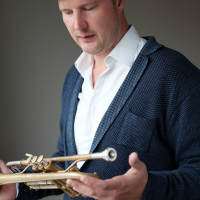 Mikko “Gunu” Karjalainen (b.1974) is one of the most wanted trumpet soloists in Finland.

He started his journey with music playing piano at the age of six. Very soon he decided trumpet to be his main instrument and started to explore. At his early teens he played trumpet, piano and harmonica with blues and soul bands in a little town of Kajaani. After moving to Helsinki in mid 90's he was completely thrown into jazz loop.

Listening to giants like Clifford Brown, John Coltrane, Miles Davis, Chet Baker, Duke Ellington, Nat King Cole and Kenny Dorham strenghtened his love for jazz and helped him to develop his own lyrical approach to this music.

His tone is warm, soulful and beautifully controlled. His playing is rhythmically clear and determined and his storytelling is always a pleasure to follow.

Gunu is widely known for his endless stage-charisma and outgoing attitude.

The meaning of jazz? “To respect the past and keep on eye on the future.”

All About Jazz musician pages are maintained by musicians, publicists and trusted members like you. Interested? Tell us why you would like to improve the Mikko Karjalainen musician page.