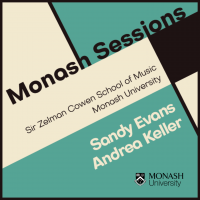 https://monashschoolofmusic.bandcamp.com/album/sandy-evans-andrea-keller-monash-sessions This project features two of Australia’s most distinctive and distinguished jazz musicians, Sandy Evans and Andrea Keller. It also features Monash University jazz students who had the privilege and rare opportunity to rehearse, perform and record Evans and Kellers’ compositions with them. This unique student experience is a key pedagogical approach within the Sir Zelman Cowen School of Music, with established artists mentoring the next generation of jazz musicians. "This project was a wonderful creative opportunity and an honour for me. The community of young musicians at Monash were an absolute joy to work with – imaginative, skilled, adventurous, joyful, dedicated and generous. Andrea Keller is one of my all-time favourite musicians and a dear friend. Playing with her in this context was a deeply rewarding and enjoyable experience. Watching her direct and inspire young musicians was a precious treat that has enriched my own creative and teaching practice. Special thanks to Rob Burke, the music faculty and technical staff at Monash for all your help and support, and for making opportunities like this possible". - Sandy Evans "A truly inspiring week of music, created with the talented young musicians at Monash University, and my mentor and dear friend Sandy Evans. What an honour to hear my music played by both small and large ensembles, to be immersed in the exuberant energy of the students, and to witness one of Australia‘s great musical leaders work across the spectrum of teaching, performing, and recording. For me, at the centre of jazz and improvised music is a philosophy that focuses on sharing: the Monash Sessions project certainly exemplified that." - Andrea Keller Produced by Robert Burke, Ben Grayson and Paul Williamson Recorded and mixed by Ben Grayson and students at the Sir Zelman Cowen School of Music Auditorium. Mastered by Ben Grayson Monash University technical assistance by Karl Willebrant. Artwork by Susy Cirina Special thanks to Sandy Evans and Andra Keller for their inspiration, generous time and energy on this project. Thank you to Ben Grayson for the quality and timely nature of your work. Thanks to Travis Woods and Susy Cirina at Implant Media. Thank you to the Monash University student performers for their creativity and professionalism. Thanks also to the staff at the jazz and improvisation team at Sir Zelman Cowen School of Music, Monash University: Robert Burke, Paul Williamson, Jordan Murray and Johannes Luebbers.

All About Jazz musician pages are maintained by musicians, publicists and trusted members like you. Interested? Tell us why you would like to improve the Monash Sessions: Sandy Evans & Andrea Keller musician page.