In 1987, the pedagogical institute in Weingarten, Germany awarded a scholarship for a one-year exchange program at the University of Alabama to one of their students, jazz pianist Monika Herzig. Together with her partner and guitarist Peter Kienle, she arrived in the States on a one-way ticket, with one suitcase of belongings and one guitar in August 1988.

Since then she has completed her Doctorate in Music Education and Jazz Studies at Indiana University, where she is now a faculty member. As a touring jazz artist, she has performed at many prestigious jazz clubs and festivals, such as the Indy Jazz Fest, Cleveland's Nighttown, Louisville's Jazz Factory, the W.C.Handy Festival, Jazz in July in Bloomington and Cincinnati, Columbus' Jazz & Rib Fest, to name just a few. Groups under her leadership have toured Germany, opened for acts such as Tower of Power, Sting, the Dixie Dregs, Yes, and more.

Recently she has received her third “Individual Artist Grant” from the Indiana Arts Commission in support of her newest CD project. Her previous release In Your Own Sweet Voice �” A Tribute to Women Composers has received much praise. Thomas Garner from Garageradio.com writes, “I was totally awed by the fine musicianship throughout”. As a recipient of the 1994 Down Beat Magazine Award for her composition “Let's Fool One” and with several Big Band Arrangements published with the University of Northern Colorado Press, Herzig has also gathered international recognition for her writing skills.

The current repertoire of the Monika Herzig Acoustic Project includes originals and arrangements of standard repertoire, such as Carole King's “You've Got a Friend”, Kern/ Hammerstein's “The Song Is You”, and Charlie Parker's “Yardbird Suite”. The Monika Herzig Trio can be heard every Thursday and Saturday at Rick's Cafe Boatyard at Eagle Creek Reservoir in Indianapolis. For current tour listings and sound samples/ videos visit www.monikaherzig.com.

The lady can get down and play! John W. Patterson, AAJ Fusion/ Progressive Editor

"David Baker: A Legacy in Music" By Monika Herzig, with a Foreword by...

Pianist Monika Herzig Invites You on a Journey with New CD/DVD Release...

The lady can get down and play! John W. Patterson, AAJ Fusion/ Progressive Editor 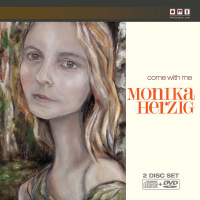 From: Eternal Dance
By Monika Herzig

From: Sheroes
By Monika Herzig

All About Jazz musician pages are maintained by musicians, publicists and trusted members like you. Interested? Tell us why you would like to improve the Monika Herzig musician page.