Q Pollard is a keyboardist who experienced his early life in a musical environment. His late father, Monti was a gifted Master Percussionist who provided the foundation for Q to explore later on in developing the ear to continue playing and learning mostly on his own, various styles of music. Q, who originates from Washington, DC, has strong Afro-Cuban, Latin and Brazilian flavor in his music as well as a feel for Contemporary Jazz and Gospel. Q has played with with several bands beginning with High School and into the military where he helped formed a band with several soldiers from all over the country. He has played in the church for several years and is currently playing with the Aniya Jazz Band and Spirit for Jazz, both out of Wilmington Delaware. He has also performed with Aniya Jazz at several venues in the Delaware and Philadelphia area including the very first West Chester, Pa. Jazz Fest as well as the famed DuPont, Clifford Brown Jazz Fest on numerous occasions. Q, having only been tutored in London for about six months of piano lessons, began writing arranging and performing some of his own compositions beginning in 2009. The past few years have been crucial in his musical progress and have blessed all who hears it! His musical influence list is a long one! It includes Herbie Hancock,Wayne Shorter and Weather Report, McCoy Tyner, Keith Jarrett, Bob James, Chic Correa and Return To Forever, The Yellow Jackets, Azimuth, Sergio Mendes, Miles Davis, Herbie Mann, Santana, Afro-Cuban Project, Earl Klugh, Al Jerreau, George Duke, Henri Mancini, John Coltrane, War, The Isley’s, Earth Wind and Fire, Ohio Players, Gap Band, Atlantic Star, Chaka Kahn, Prince, Chris Botti, Stanley Clarke, Brian Culbertson, Greg Karukas, Peter White, Mandrill, Stan Getz, Grover Washington, Jr., Ramsey Lewis, Deodato, Lonnie Liston Smith, Pharoah Sanders, George Benson, Quincy Jones, Ben Tankard, Burt Bacharach and the list goes on! Currently, Q creates his music on keyboards through computer programs and software and loves to try his hand at writing and arranging most of the parts himself and producing original musical landscapes. 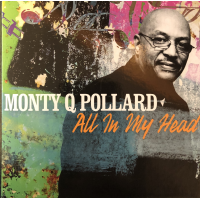 All In My Head

Monty Q Pollard
All In My Head

All About Jazz musician pages are maintained by musicians, publicists and trusted members like you. Interested? Tell us why you would like to improve the Monty Q Pollard musician page.