”We go on the bandstand to kill, loaded for bear,” bassist Norman Edge says, describing the relish he and pianist Morris Nanton bring to their trio performances. Shortly after Nanton's service discharge in 1956, he met Edge, and their connection was immediate.

For a full forty-eight years Nanton and Edge have played together, longer than many marriages last. Drummer Jeff Brillinger is the junior member of the Morris Nanton Trio, with a mere twenty-six years of seniority. Such stability is remarkable in the jazz world, where even the most successful working groups are in a constant state of flux.

While Nanton is the leader of the trio, he is a reserved person, preferring to let his music speak for him. Edge, an accomplished musician in both jazz and classical spheres, often functions as spokesperson for the group. “We were like brothers,” Edge explains. “Our mothers were interchangeable. My mother loved Morris like another son, and his mother felt the same about me.”

Nanton and Edge's well-honed musical rapport in the trio, and sometimes as a duo, are frequently on display throughout New Jersey. The trio currently has a regular gig every second Thursday of the month at Shanghai Jazz, a jazz club featuring Chinese cuisine in Madison, New Jersey. City-centric New Yorkers may feel they too should be loaded for bear, for the trek into New Jersey. However, Madison is easily accessible from Penn Station by commuter train, and Shanghai Jazz is a pleasant three-block walk from the station. Yet, the Morris Nanton Trio's performances remain one of Jersey's best kept secrets. 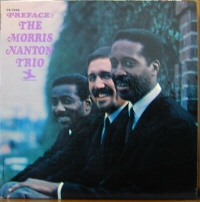 All About Jazz musician pages are maintained by musicians, publicists and trusted members like you. Interested? Tell us why you would like to improve the Morris Nanton musician page.