Mosaic is an ensemble/collective dedicated to forging an original voice in Jazz. Together they perform an eclectic range of styles to create a music that's unique and experimental yet remains accessible. Expanding on the traditions of post Bop, Afro-Cuba, electric Jazz and the avant-garde, their rhythmic and harmonic approach is deep and diverse. Whether playing their own works, or those of the great composers of Jazz, they aim to provide a music for the body and the mind. With an instrumentation of keyboards, bass, drum set, and a wide array of woodwind instruments and percussion,Mosaic hopes to put their own stamp on the American legacy known as Jazz.

Matt Belzer (sax): Multi-instrumentalist/composer Matt Belzer is the Director of Jazz Studies at the University of Maryland, Baltimore County. In addition to Mosaic, he is a member of the improvisational drum and sax duo Tiemann-Belzer and the classic jazz group the Peabody Ragtime Ensemble. His performances and compositions have been honored by the Maryland State Arts Council, Downbeat Magazine, the Jazz Composers Alliance. He is listed in the 2009 Marquis “Who`s Who in America.” His music is published by Advance Music and UNC Jazz Press.

Ned Judy (keys/piano):Ned has performed with numerous jazz and popular music artists including Eva Cassidy, the Shirelles, Little Anthony, the Rivingtons,and Michael Henderson. Served as musical director at the Second City Theatre in Los Angeles and has been an improvisational pianist, composer, and sound designer for theatrical productions in the United States,the Caribbean, Europe, and Asia. Currently an Associate Professor of Music at Prince George’s Community College and preparatory jazz piano instructor at The Peabody Institute in Baltimore.

Larry Melton (upright bass): Larry Melton one of the most in demand bass players in the Washington/Baltimore area. Fluent on both upright and electric bass he has been involved in situations ranging from straight ahead jazz and Latin to rock and fusion. He was a founding member of the fusion band Permanent Vacation and is currently active with Mambo Combo and the Jarflys. Larry has also worked with Rob Levit, Charles Wright, Peter Fraize and drummer Greg Phillips. Currently Larry takes frequent trips to Europe to accompany violinist Dan Cassidy (brother of world renowned vocalist Eva Cassidy). Larry is also an avid photographer and produces recording projects at his own Snack Studios.

Mark Merella (drums/percussion: Mark is a versatile percussionist adept at both drum set and hand percussion. He has worked with a variety of artists in the Jazz and Latin fields including Paul Carr, Rene McLean, Steve Turre, Ray Vega and percussionist Steve Berrios co-founder of the Fort Apache Band. Mark has also worked with the groups Rumba Club, Afro-Bop Alliance and as part of Duende Quartet he toured Turkey, Cyprus and Eastern Europe as part of Jazz At Lincoln Center's “Rhythm Road” project. As a freelance musician Mark has played at many embassies, the White House and the Kennedy Center and also appears in the critically acclaimed film “Syriana”.

David Font-Navarrete (percussion): David is part of a new generation of percussionists,versatile and equally at home in traditional and modern music. He has performed professionally throughout the United States, as well as in Cuba, Canada, Europe, and Japan for more than a decade. Since arriving in Washington, DC from Miami three years ago, he has performed with groups including Fertile Ground, WES Group, Chopteeth and Havana Select. He also works as a ritual drummer and singer in the Afro-Cuban Lukumi tradition. His own experimental project, Io, fuses ambient and electronic music with acoustic music to create futuristic soundscapes. David runs the independent label Elegua Records. Show less

Mosaics: The Life and Works of Graham Collier by Duncan Heining from...

All About Jazz and Mosaic Records/True Blue Music Newsletter...

Mosaic...breaks richly, reverently and with much wit and beauty. Compositions...get approached and explored anew. You'll be glad you accepted [their] offer. ~Bobby Hill, WPFW 89.3 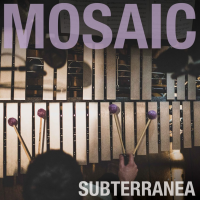 All About Jazz musician pages are maintained by musicians, publicists and trusted members like you. Interested? Tell us why you would like to improve the Mosaic musician page.