Mwalim *7), a.k.a. DaPhunkeeProfessor is a multidisciplinary, master artist and teacher. As a musician, singer, songwriter, arranger and producer, he is the type of soul - funk - jazz artist who embodies the time-honored tradition of the musical storyteller. A vibrant and prolific figure in the underground soul and dance music scene, Mwalim notes, “I never made a killing, but I've always made a living.” Nicknamed ‘DaPhunkeeProfessor’ by a former student; Mwalim is a tenured professor of English and Black Studies at the University of Massachusetts Dartmouth.

Playing Carnegie Hall before he turned 14, Mwalim began his career in the 1980's, while attending Music & Art High School. Hanging out in the fabled 251 West 3oth Street music building led to doing session work at Planet Studios and Rogue studios; later doing session work at Jazzy Jay Recording Studios when it was located in the Bronx. Nicknamed “The String Guy” for adding violin, viola and cello parts to songs, he also played keyboard on a number of early hip-hop, r&b and dance music recordings in New York City and eventually Boston, MA.

He went on to attend Boston University as a music composition and history major, where he continued his work as a studio session player. He also joined New African Company -the oldest professional Black theater company in New England- initially as a composer in residence, but also received formal training in theater arts and arts education. Upon completing his undergraduate work, he continued as a film student, earning a MS in Film Production.

Mwalim came into his own as a producer, arranger and remix artist, lending his talents to projects by a myriad of major and independent labels and artists before emerging as a solo soul and spoken-word artist in the late 1990s in the east coast small club circuit. As an underground soul artist, his style and sound was part of the foundation for the 'neo-soul' trend. A mentor to many up and coming artists, he is considered the 'Godfather of the South Coast Soul Movement' (referring to the Southern region of New England). After a bad stint with a major record label, Mwalim re-organized his own independent label, Liberation Music – MGM from the imprint that he formerly used, Midnight Groove Recordings/ Multimedia.

Winner of the 'Best Male Jazz Artist' category at the 2010 and 2012 New England Urban Music Awards, Mwalim has opened for and/or performed with Musiq, The Four Tops, Angie Stone, The P-Funk All-Stars, The Last Poets, KRS –ONE, and N’Dambi. His CD, “The Liberation Sessions” (Liberation Music – MGM) scored the club hit, DEM BIG GIRLS and earned multiple top nominations from the Urban Music Awards as well as two Top nominations from the 2010 Native American Music Awards (NAMMYs). After a stint at a major label as an artist and producer, Mwalim helped form Liberation Music - MGM in 2007, launching their first release in 2008; the critically acclaimed “Sketches of a Neighborhood” as The Bass Mint Bros.

”He grew up immersed in a blend of his Bajan (Barbados) and Wampanoag cultural heritages, both of which highly value voice for song and spoken-word communications.” - PAMELA MAREAN, New Bedford Standard Times

“The highlight of the night for me was a soulful, four-piece jam session featuring Mwalim *7)” - Jason Perry, Southcoast 247 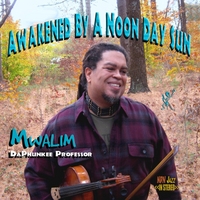 Awakened By A Noon...

Awakened By A Noon Day Sun

All About Jazz musician pages are maintained by musicians, publicists and trusted members like you. Interested? Tell us why you would like to improve the Mwalim *7) -DaPhunkee Professor musician page.