My Kind Of Picture 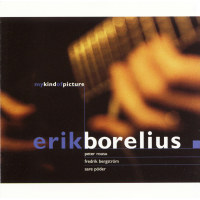 Pressrelease MY KIND OF PICTURE (EB MUSIC 1995). The Setting. The elevator up to fifth floor. Thin walls from the early functional-style period. Lonely tones can be perceived. 44 square meters; studio, guitars everywhere. 17 degrees Celsius in the winter, 30 in the summer. Riddarfjärden (“Bay of Knights” in the middle of Stockholm) glitters and inspires. “My Kind Of Picture” has to a great extent been created under the influence of the environment in which it was made. As the title “My Kind Of Picture” reveals Erik has, on this his fifth album, been thinking in pictures while composing: “Oceans May” – the power of the ocean is absolute. Waves against a desert beach. The sun is dark, dark red. “Silent Reunion” – pure and simple romance. “Northern Lights” – far away but yet so close. Northern lights was played every morning in Swedish Television between 1996-2000. Spreads light but also sadness. The title and title melody is a declaration of love to the motion picture that in its way of expression is related to the music. Fredrik Bergström – “The man with the three arms” – and Peter Rousu lends weight and rhythm to the music. The keyboard virtuoso Aare Pöder, who participated on Eriks previous CD “Duende” plays an important role this time as well. Johan Adelstål took the pictures and made the cover design.

Help improve the My Kind Of Picture page

All About Jazz musician pages are maintained by musicians, publicists and trusted members like you. Interested? Tell us why you would like to improve the My Kind Of Picture musician page.