Nelson recently released CD titled 'Camino Al Barrio' A Contemporary Latin-Jazz recording peaked at #8 on the Jazz Week World Music Chart. He was was recognized among his peers and nominated for 'Best Latin Jazz Guitar' and Best Next Generation Artist' on the Latin Jazz Corner 2010 Best of the Year Awards

Born in New York to Colombian parents, guitarist Nelson Riveros grew up listening to his parents record collection which included FrankSinatra, Nat King Cole, and the rhythms of Cumbia and Salsa. These recordings were a staple, instilled him with a musical appreciation from an early age. Nelson started playing guitar in high school and became well-versed in many styles of music which included Jazz, Latin, and Rock. He studied guitar with George Bien, a very in demand guru- guitar teacher from Queens who turned him on to the recordings of Wes Montgomery, Joe Pass, Pat Martino, Larry Carlton, Lee Ritenour.

After briefly attending the Berklee College of Music, Nelson returned to New York to involve himself in the music scene and played in many bands. For several years he worked for guitarist/producer Nile Rodgers' Sumthing Else Musicworks before returning to school.

He graduated with a Bachelor of Music in Jazz Studies from City College where he studied guitar with Gene Bertoncini, Pete McCann and composition with Mike Holober and performed at the CUNY JAZZ FESTIVAL Nelson also studied music at Mannes College of Music where he studied guitar with Vic Juris and Remo Palmieri (Charlie Parker, Dizzy Gillespie) Nelson has peformed with artists Adela Dalto, Alfredo De La Fe, John Benitez, Luis Bonilla, Nicky Marrero, Samuel Torres and Hector Martignon. Nelson has been on the guitar faculty at the 92nd Street Y School of Music since 2005 and as a Teaching Artist for the 92nd Street Y Outreach program.

Check out the LJC Listening Center with a Free MP3 Download from Nelson...

On the faculty of the 92ST Y School of Music since 2005 teaching private lessons as well as guitar ensembles. Work as a Teaching Artist for the 92ST Y Outreach Program which brings music to public schools in NYC 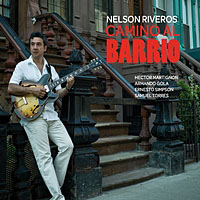 All About Jazz musician pages are maintained by musicians, publicists and trusted members like you. Interested? Tell us why you would like to improve the Nelson Riveros musician page.