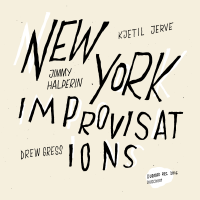 Recorded in Oktaven Audio, Yonkers, New York on June 19th 2015. This was the first meeting between these players, except that the Norwegian pianist Kjetil Jerve (pronounced chetyl yarva) previously took lessons with the American bass player Drew Gress. Inspired by the legacy of Lennie Tristano and his harmonic approach to free improvisation, Jerve initiated this spontaneous session without compositions or arrangements. It is a document of raw energy, crystalizing in the context of jazz improvisation, collectively reaping the rich sonics of a fruitful first meeting. Well respected as masters of their instruments, Halperin and Gress have represented the vanguard of a variety of scenes in New York since the 1980s. They have released several acclaimed albums as band leaders and composers, and both are deeply devoted to the spirit of music. Halperin, an original Tristano student who performed and recorded with among others Warne Marsh, Jorge Rossy, Lee Konitz and Eddie Gomez, embodies the cool school of East Coast jazz and continues to extend the metric and melodic frequencies throughout his practice. Drew Gress has garnered fame for his work with among others Fred Hersh, John Abercrombie, Ravi Coltrane and Steve Coleman. His artistic weight as a most solid bassist combined with a composer’s fredom as a universal improviser has led to numerous awards and genre-defining music. “New York Improvisations” is the premiere release of the brand new Norwegian record label “Dugnad rec”, co-run by Jerve and his colleague, Norwegian bass player Erlend Albertsen.

All About Jazz musician pages are maintained by musicians, publicists and trusted members like you. Interested? Tell us why you would like to improve the New York Improvisations musician page.