Nick Paul was born and bred in London.

He was very active during the 60s, 70s and 80s in the south of England and also in Europe playing New Orleans Jazz. Paul played with many bands including The Barry Martin Ragtime Band, Malc Murphy's Storyville Stompers, Bill Brunskil, The New Iberia Stompers, The New Revival Jazz Band and spent time in New Orleans listening to the masters and improving his knowledge of the music.

He left England in 1987 for sunnier climes and lived aboard his sailing boat “Storyville” in Cyprus for ten years playing in hotels and clubs. His musical tastes broadened and for the last 12 years he has been playing mainly small group swing and mainstream jazz of the 50s era.

Nick now lives in Thailand and is still playing. He has established a small recording studio.

when the lights are... 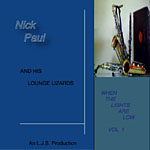 When the Lights Are...

All About Jazz musician pages are maintained by musicians, publicists and trusted members like you. Interested? Tell us why you would like to improve the Nick Paul musician page.