Nick Reynolds, who as a college student grabbed a guitar, donned a broad- striped button-down shirt and quickly helped propel the 1950s folk music revival to the top of the pop music charts as a founding member of the Kingston Trio. The group helped drive the folk music revival that paved the way for such artists as Bob Dylan and Peter, Paul and Mary.

The group's recording of the tragic 19th century folk ballad “Tom Dooley” went to No. 1 in 1958 and earned Reynolds and his partners Dave Guard and Bob Shane a Grammy Award for best country and western performance at the first Grammy ceremony. In that inaugural year, the Grammys had no categories dedicated to folk music, which was booming on college campuses around the country. The following year, the group's album The Kingston Trio at Large picked up a second Grammy for its members.

The first thing that turned me on to folk singing was Odetta ... from Odetta, I went to Harry Belafonte, the Kingston Trio, little by little uncovering more as I went along.
Bob Dylan

Reynolds typically handled the middle part of the trio's scintillating three-part harmonies, sometimes adding congas and other percussion accents. Although the group's music generally shied away from the politicized content of such forbears as Woody Guthrie and the Weavers, its commercial breakthrough in the late-'50s represented a clean-cut alternative to the sexualized rock 'n' roll of Elvis Presley, Little Richard, Jerry Lee Lewis and others that had American teens in its grip. And it helped set the stage for such upcoming folk-rooted protest singers as Dylan, Joan Baez and Peter, Paul and Mary.

“It really started with the Weavers, in the early '50s,” Reynolds said in a 2006 interview speaking of the group that included Pete Seeger. “We were big fans of theirs, but they got blacklisted in the McCarthy era. Their music was controversial. Suddenly, they couldn't get any airplay; they couldn't get booked into the big hotels, nothin'.

“We played their kind of music when we were first performing in colleges. But when we formed the trio ... we had to sit down and make a decision: Are we going to remain apolitical with our music? Or are we going to slit our throats and get blacklisted for doing protest music? We decided we'd like to stay in this business for a while. And we got criticized a lot for that. ... If Bob Dylan or Joan Baez had come out at that time, they'd have been dead in the water. But four or five years later their music became commercially viable.”

The trio also charted hits with “The Tijuana Jail,” “M.T.A.” and Seeger's “Where Have All the Flowers Gone,” a protest song that became popular with anti- Vietnam War activists and that the group eventually sang on the White House lawn as President Lyndon Johnson and his wife, Lady Bird Johnson, looked on.

Nicholas Wells Reynolds was born July 27, 1933, in San Diego to Stewart Shirley Reynolds, a Navy captain, and Jane Keck Reynolds. The family, including sisters Barbara and Jane, often engaged in singalongs led by their father, a guitarist with an affinity for old folk songs. It was in these sessions that Reynolds developed his facility with intricate vocal harmonies that became one of the hallmarks of the Kingston Trio's music.

Nobody could nail a harmony part like Nick. He could hit it immediately, exactly where it needed to be, absolutely note perfect, all on the natch. Pure genius.
Bob Shane

After graduating from Coronado High School in 1951, he attended the University of Arizona and San Diego State before enrolling at Menlo College near San Francisco.

During a particularly dull accounting class, he noticed a student dead asleep and later introduced himself to Bob Shane. Shane and Dave Guard knew each other from the time they'd played music together in Guard's native Hawaii, and when Guard decided to reconfigure his Kingston Quartet, which he started while studying at nearby Stanford, he drafted Shane and Reynolds.

Reynolds left the group in 1967 after the British Invasion rendered its style effectively antiquated in the minds of pop music fans, and moved his family to Oregon, where he stayed until the 1980s.

In 1991 he joined Shane in a reconstituted version of the Kingston Trio. Guard died of cancer that year, and had left the trio in the 1961 to form his own group. Guard was replaced by singer-songwriter John Stewart, who went on to have a significant solo career. Stewart died in January of a massive stroke.

Reynolds continued performing with Shane until he retired a second time in 2003. Shane eventually bought Reynolds' and Guard's shares of the rights to the Kingston Trio name so he could use it exclusively, and the act has continued to tour since Shane's retirement with three latter-day members.

In recent years, Reynolds and Stewart had hosted a “Trio fantasy camp” in Arizona, where folk music fans would learn to play and sing many of the trio's hits and other folk standards. Show less 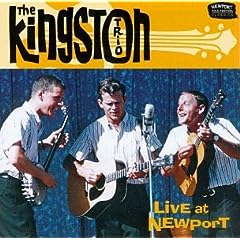 All About Jazz musician pages are maintained by musicians, publicists and trusted members like you. Interested? Tell us why you would like to improve the Nick Reynolds musician page.