Born and raised in Seattle, Washington, Nick Roseboro was exposed to jazz by his friends at the age of 13. Recognizing his talent, his middle school teacher coerced Nick into playing in the jazz band, which led to musical travels in Europe with the school jazz band. Completely committed by the end of high school, Nick moved to New York City to attend New School University where he studied with Reggie Workman, Billy Harper, Charles Toliver, Junior Mance, Eddie Henderson and Rachel Z and graduated in 2005. He appears as a guest artist with Rachel Z and has performed with Joe Chambers, Rene Marie, Kenny Barron, and Ralph Peterson. He performs regularly with his own group, the Nick Roseboro Quartet featuring many of the young talents of today. 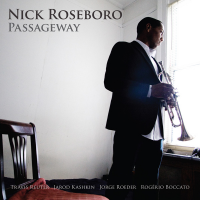 All About Jazz musician pages are maintained by musicians, publicists and trusted members like you. Interested? Tell us why you would like to improve the Nick Roseboro musician page.