With all the members of the Nico Soffiato Quartet residing in New York City, the group began playing and performing together in 2008. Incorporating influences from the variety of jazz scenes in the city, each member of the Quartet weaves their own life and musical experience into the composition, performance and improvisation of each tune. Collaborating on all fronts, most of the music on the record is composed and arranged by Nico Soffiato. Playing extensively around New York City, the Quartet has developed great rapport with an enthusiastic following.

This record captures the work of two years of writing, performing, and growing. Showcasing the deep interaction of the members, the record demonstrates something that is constantly evolving, something that illuminates the craft of process. Marking the chronology of this process, this record uncovers the group’s musical direction. Through collective improvisation, a key aspect of the Quartet’s performance, the attitude and quality of the music has organically evolved into what can be heard as the musical identity of the record.

NICO SOFFIATO, Italian guitarist, composer and educator, currently lives in Brooklyn, NY. After receiving his Master’s degree in philosophy with a thesis on the ontology of music, he moved to Boston. There he attended Berklee College of Music, thanks to a Best Entering Talent Students scholarship, and graduated magna cum laude. At Berklee he studied performance and composition with David Tronzo, Jon Damian, Hal Crook, Ed Tomassi and Jeff Galindo to mention a few. During his stay he was awarded a second scholarship: the Berklee Achievement Scholarship. Nico was also selected to be part of an all-guitar ensemble whose members included notable alumni like Bill Frisell, Kurt Rosenwinkel, Mike Stern and Wolfgang Muthspiel. In New York, aside from being the front man of the Nico Soffiato Quartet, he leads the improvised music group Paradigm Refrain with which he’s been performing for over two years at a monthly residency in Brooklyn. The group has a diverse cast and guests have included: David Tronzo, Nate Wooley, Sunny Kim, Marco Cappelli, Bruno Raberg, Marco Cappelli, Zeno de Rossi, Nick Falk, Petr Cancura, Giacomo Merega, , Brian Adler, Noah Kaplan and many others. Nico co-leads a duo with trumpeter Josh Deutsch and they will be releasing a record in 2011. As a sideman and solo performer, Nico has performed extensively in the US and Italy.

NICK VIDEEN alto sax In 2001 he received a scholarship to attend New England Conservatory, where graduated with distinction in 2005. He can be heard on Bob Moses' latest release: The Father's Day B'hash, as well as two albums released by The Superpowers (an award winning 10-piece afrobeat band): Revival Time and Trance for Nation.

GIACOMO MEREGA el. bass Giacomo moved to Brooklyn from Boston in 2007, where he had studied at Berklee and then at The New England Conservatory. His debut CD The light and other things featuring slide-guitar icon David Tronzo, was released on Creative Nation Music to critical acclaim in 2008. His most recent work Descendants, in a quartet co-lead along with saxophonist Noah Kaplan and featuring guitarist Joe Morris, is scheduled for release in mid 2010 on Hat Hut - hatHOLOGY.

ZACH MANGAN drums Drummer Zach Mangan, originally from Minnesota, lives in Brooklyn, NY. He received a scholarship to attend Berklee College of Music. He is a sought-after sideman and has opened for Happy Apple, The Gang Font and Bill McHenry. He has performed internationally with recording artist Sydney Wayser, including the South-by-South West, Newport Folk Festivall, Montreux Jazz Festival and Yokohama Improv Festival in Japan. Show less

“With creative treatments and impressive attention to nuance, the ensemble crafts intriguing, enigmatic music that stands out from the otherwise oversaturated jazz scene and its tired sound.” John Engelmann, Knocks from the Underground NYC

“Soffiato is a player who has studied the greats during his upbringing, but has also managed to develop a unique voice along the way; not an easy task for any player to achieve.” “…Just Add Water brings to light all of the things that make modern jazz great: openness to interaction, solid grooves and a respect for the tradition while firmly looking forward.” Matthew Warnock 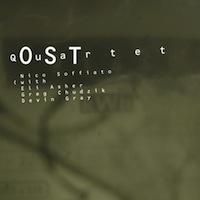 All About Jazz musician pages are maintained by musicians, publicists and trusted members like you. Interested? Tell us why you would like to improve the Nico Soffiato musician page.