Home » Musicians » Discography » Not So Standard 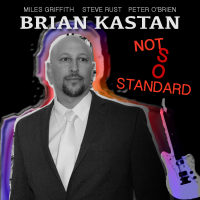 Jazz-Fusion guitarist, Brian Kastan introduces his newest CD, “Not So Standard". This album showcases dynamic New approach to playing mostly jazz and two classic rock standards from the sound perspective on the Brian Kastan group. The goal of this album is to demonstrate how Brian has developed a new and exiting hybrid finger picking technique that allows the listener to hear something new with-in the American songbook that brings the listener on a virtuosic and sensitive improvisational journey. The band is constantly pushing, pulling, and weaving the compositions to create music that articulates the feeling of always evolving with in the structure of the composed song. This album produces high energy jazz-fusion between Brian Kastan’s raw yet playful electric guitar, Miles Griffith’s rich provocative vocals, bassist Steve Rust’s artful sound pallet, and Peter O’Brien’s rhythmic and dynamic play on drums—All of which take the listener on a journey to new, uncharted musical territory. “Not So Standard” showcases their skills—and their musical telepathy in a way that is ultimately satisfying and exciting for both the players and listeners. Brian Kastan plays electric/acoustic guitar, electric bass, and composes soundtracks for TV and Film and has released 10 albums as a band leader. Played guitar for Nonsuch Record Label, Rhys Cantham's "The Grissom Grail", Recorded Live at Lincoln Center in 2010. He is also an award winning nature photographer with gallery shows in NYC, Europe and Asia. Miles Griffith, GRAMMY WINNING (with Wynton Marsalis, Blood on the Fields) vocalist/composer, has been a vital member of the New York jazz scene for more than two decades. A very short list of who he’s played with includes NEA Jazz Masters Ron Carter, Wynton Marsalis, Jon Hendricks, Max Roach, Toshiko Akioshi, Jimmy Heath and Barry Harris; venerable icons including Jimmy Heath, Sir Roland Hanna, and Reggie Workman; Cassandra Wilson, Carl Allen, and T.S. Monk; Lisa Sokolov, Jamaaladeen Tacuma, and Jay Clayton. Miles Griffith is also a notable band leader whose vocal range and unique musical insight make him a highly recognized composer and singer of his time. Steve Rust, bassist/composer knows his way around a concert hall, orchestra pit, and recording studio. He’s written for both film and theater, has collaborated with visual artists, and has appeared on dozens of albums. Steve, comfortable in virtually every musical genre, has accompanied everyone from Anthony Braxton to Eileen Fulton, from Jay Unger to Sir James Galway to Hubert Laws, Paul Simon, Natalie Merchant, and Baikida Carroll. Steve is a well known bass player in the style of sound painting. Peter O’Brien, drummer, has played with artists such as, Eric Person and Dr.Lonnie Smith.He has toured with legendary musicians including organist Brother Jack McDuff, Edgar winter, and Roy Buchanan, before joining guitarist John Hall and his hit band Orleans. Besides maintaining a busy schedule appearing at major music festival/clubs across the country, and around the world, he also teaches at Bard College as well as privately. For Booking Contact: [email protected]

Corners of the Sky

Tales Of Wonder: A Jazz Celebration Of Stevie

The Funky Side of Sonorama

Help improve the Not So Standard page

All About Jazz musician pages are maintained by musicians, publicists and trusted members like you. Interested? Tell us why you would like to improve the Not So Standard musician page.