Home » Musicians » Discography » Nothing Wrong: The Music of Lenny Carlson

Nothing Wrong: The Music of Lenny Carlson 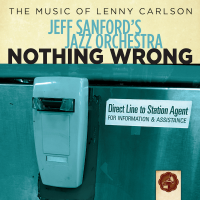 This project was a direct outgrowth of Jeff Sanford’s Cartoon Jazz Band, a group that started as a “rehearsal band,” getting together on Monday nights to play big band charts of Raymond Scott’s music that Jeff had unearthed from dusty footlockers and other sundry locales. Grammy nominated guitarist and composer Lenny Carlson met Jeff in 2009 under questionable circumstances, however, our lawyers advise us not to comment on an ongoing investigation….  Sometime after that meeting Jeff asked - or blackmailed - Lenny into writing original music for the band, and Lenny has now been composing specifically for this group of musicians for over a decade. To have a set of regular musicians at your disposal, ready to play anything you put in front of them, is a composers dream. As a band, to have a dedicated composer at your disposal, ready to listen and make changes in real time, is also a dream. This extraordinary relationship between composer and musicians has resulted in a deep catalogue of truly creative contemporary jazz.

Help improve the Nothing Wrong: The Music of Lenny Carlson page

All About Jazz musician pages are maintained by musicians, publicists and trusted members like you. Interested? Tell us why you would like to improve the Nothing Wrong: The Music of Lenny Carlson musician page.