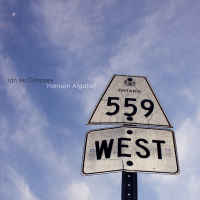 August 28, 2018; Can a Soul Be Bright; 39; What Will Be Left; From the Ground; Saying Little; In Equal Measure; 42; Late Harvest; From the Blossom; The Sun Shone Still; Paying Dearly; Guitar; Horn; Swings;

“Ontario 559 West” is an upcoming release from Ian McGimpsey and Harrison Argatoff. Inspired primarily by Nick Drake’s “Pink Moon”, this album pairs the tenor saxophone and acoustic guitar in short, precise, and heartfelt songs. The songs were developed both independently and collaboratively in February of 2020 and are an instinctive blend of the contemporary jazz and singer- songwriter idioms. With intentions focused on simplicity and uncolored presentation, the early compositional process assigned each song a number, starting arbitrarily at #38. Since then, however, this intention has softened, and most pieces have been renamed. The album’s title, Ontario 559 West, is a highway in Ontario (Canada), which runs east-west about 250 km north of Toronto. This highway leads to a house on Lake Huron’s Georgian Bay where the music was recorded in early March. The landscape featured feet deep snow, an ice-covered bay, and two musicians enthusiastically recording, warming our hands by the (noisy) fireplace between takes.

All About Jazz musician pages are maintained by musicians, publicists and trusted members like you. Interested? Tell us why you would like to improve the Ontario 559 West musician page.