One of the most recognizable and respected names in the storied history of New Orleans brass band music is “Onward.” Founded “some time before 1877” according to one source, the Onward Brass Band gained considerable popularity during the 1880s. By the time of the Spanish-American War in the late 19th century, the ensemble had achieved a reputation as the number one marching band in New Orleans.

Following the war, cornetist Manuel Perez (a student of Onward founder Sylvester Coustaut) assumed leadership of the band. Onward Brass Band soon came to be regarded in the local music community as the most exciting of the city’s early brass bands. Its membership included many New Orleans music legends: in addition to Perez himself, names such as Peter Bocage, Lorenzo Tio Jr., George Baquet, Isidore Barbarin, and even, for a brief time, King Oliver.

Unfortunately, this band never recorded. Perez was Onward’s leader (on and off) from 1903 until the unit disbanded about 1930. The band seems to have fallen into decline during the Great Depression, and its history for the next three decades is obscure.

Around 1960 famed drummer Paul Barbarin, the son of Isidore, determined to reform the band and pattern it after its great predecessor. Under Paul’s leadership, the Onward included his younger brother Louis, nephew Danny Barker, Louis Cottrell Jr., Placide Adams and many other top New Orleans jazz musicians.

They made two recordings (in 1965 and 1968). When Barbarin passed away in 1969, his long-time sidekick, clarinetist Louis Cottrell, Jr. (godson of Manny Perez), took over the band’s leadership. This group included several members from the preceding band as well as other fine jazz players such as Freddie Kohlman, Teddy Riley, Jack Willis and Waldren “Frog” Joseph.

They are heard on two additional recordings (1974 and 1978). Cottrell died in 1978. With that, leadership of the Onward Brass Band passed to snare-drummer Placide Adams who headed the band for the following quarter century. During that time, the band continued to make yearly appearances at the annual New Orleans Jazz and Heritage Festival. (It was pictured on the Miller Beer Jazzfest program in 2001.) At the time of Adams’ death in 2003, plans were being made for the Onward’s first recording session in 25 years.

Those plans have now come to fruition as a result of the efforts of snare-drummer Kurt Nicewander, a member of the Onward Brass Band for 14 years and entrusted by Adams with the responsibility of ensuring that the Onward’s rich heritage be kept alive. Accordingly, he assembled a stellar group of musicians, a few of whom had prior experience with the band, to make this recording. Kurt has definite plans for the band. “My intentions,” he says, “are not to start something new, but to just continue the tradition, as it was, and hopefully even improve on that. What distinguishes Onward? Quality. Unity. Spontaneity. Our performances need to be tight. I want this new era of Onward Brass Band to preserve the spirit of this historic New Orleans band.” Show less 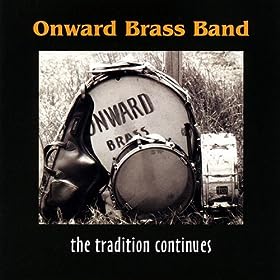 All About Jazz musician pages are maintained by musicians, publicists and trusted members like you. Interested? Tell us why you would like to improve the Onward Brass Band musician page.