Oxana Voytenko is an amazing jazz vocalist and composer. She first became interested in music at the age of 9, taking vocal lessons, which resulted in the development of her startling 3,5 octave range. She also received classical guitar training at an early age and by the time she was a teenager, had started taking part in various local and international concerts, festivals and competitions.

In 2010 she enrolled in the Academy of Music in Hanover, Germany, where she has been sharpening her musical abilities in singing, improvising, composing and arranging under the guidance of Romy Camerun with heavy influence from Klaus Heidenreich, Herbert Hellhund and Steve Sinkovics and Efrat Alony.

In 2011 she founded the Oxana Voytenko Jazzquartet, for which she composes and makes arrangements of jazz-standarts and modern compositions. Her unique take on standards like “Love for sale”, “Autumn leaves” and “My funny Valentine” continues to capture the hearts and souls of audiences across the globe. 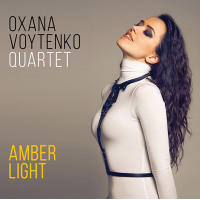 All About Jazz musician pages are maintained by musicians, publicists and trusted members like you. Interested? Tell us why you would like to improve the Oxana Voytenko musician page.