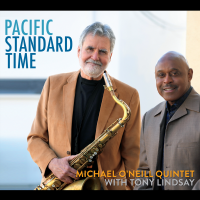 Just Friends; Fragile; Summertime; Georgia; Have You Met Miss Jones; The Way You Look Tonight; Rhythm-A-Ning; Come Rain Or Come Shine; Night And Day; Its You Or No One; You Don't Know What Love Is

Saxophonist/Arranger Michael O’Neill and Grammy Award-Winning Santana Vocalist Tony Lindsay Create Fresh Versions of Great Standards on Pacific Standard Time The Michael O’Neill Quintet’s Fourth Album Features An All-Star Jazz Lineup including Trumpeter Erik Jekabson, Bassist Dan Feiszli, Drummer Alan Hall, and Pianist John R. Burr Pacific Standard Time, released on June 14, 2019, brings us a new experience of the American Songbook directly from this group’s creative playground. Veteran singer Tony Lindsay, best known for a quarter-century run with Santana that included 11 Grammy Awards, delivers Songbook gems and jazz standards with consummate authority. Lindsay joins forces with one of the jazz scene’s best working bands, a group that’s developed an avid following for almost two decades. As well as being an in-demand drummer, Alan Hall leads his own group, “Ratatet” and teaches at the California Jazz Conservatory (CJC). Erik Jekabson also teaches at CJC and leads several small groups as well as the “Electric Squeezebox Orchestra”, a big band featuring many of the best Bay Area jazz musicians. Dan Feiszli, besides being a first call bassist, is an excellent recording engineer. He is also the bassist in the San Francisco production of the Broadway hit “Hamilton”. John R. Burr is at the top of the list as both a recording and performing pianist with a huge stylistic range. Mike Olmos and Omar Ledezma joined the group on several tracks, making excellent contributions with trumpet/flugelhorn and percussion respectively. “In this age where bands come together for a gig or two or even a tour, it’s unusual to have a group of musicians with our longevity,” O’Neill says. “Tony and I have performed in all kinds of venues for nearly 20 years, but this is our first recording together, and as you will hear, he’s an excellent jazz vocalist. Informed by his years with Santana and strong R&B roots, Tony brings a very rhythmic approach to the up and medium tempo songs and a warm and earthy feel to the ballads.” With everyone in the band contributing arrangements, Lindsay is in expert hands and he truly shines. Among the many highlights are O’Neill’s arrangement of “Summertime” in three distinct movements and Feiszli’s haunting adaptation of “You Don’t Know What Love Is”. Recorded at Fantasy Studios days before the storied Berkeley institution closed its doors for good, Pacific Standard Time is the work of artists at the top of their game, revealing and reveling in the beauty of songs that continue to communicate fundamental truths.

All About Jazz musician pages are maintained by musicians, publicists and trusted members like you. Interested? Tell us why you would like to improve the Pacific Standard Time musician page.