Paco Reinaldet born in Campo Grande, and after living for a while in the capital of Brazil, Brasilia, he moved to São Paulo, where study music and worked as a gigging musician, playing from blues-jazz to the erudite, as a way of survival. At that time, he was immersed in São Paulo's bohemian music scene, participating in several music projects. ​ In 2000 he went to Rio de Janeiro in an attempt to start an authorial musical career. Been unsuccessful, persisted in his choice of music by going to live in Lima-Peru, learning Latin music. Years later, he went to Wales-UK to study and play.

Paco devoted his time to refining the instrument timbre and also embracing “indeterminism” as an integral part of his songwriting process. He explored the silence, raised the noise to the status of music, and, despite not liking labels, he considers himself a contemporary composer thus, consolidating his own style. 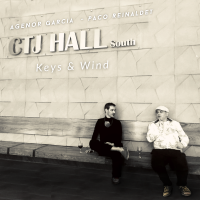 From: Keys & Wind
By Paco Reinaldet

All About Jazz musician pages are maintained by musicians, publicists and trusted members like you. Interested? Tell us why you would like to improve the Paco Reinaldet musician page.