Paolo Vinaccia was an Italian composer, jazz drummer, and percussionist who relocated permanently to Norway in 1979. He died on July 5th, 2019 after almost 10 years battling with cancer.

Amongst the many artists with whom Vinaccia has collaborated, high on the list of those with international presence include, from Norway, guitarists Terje Rypdal and Knut Reiersrud, double bassist Arild Andersen, drummer Jon Christensen, keyboardist Bugge Wesseltoft and saxophonist Bendik Hofseth, along with Danish trumpeter Palle Mikkelborg, Scottish saxophonist Tommy Smith, American vibraphonist Mike Mainieri, and American cellist David Darling.

While he's less-known on the west side of the Atlantic Ocean, Vinaccia—he of the witty black T-shirts, such as “If I'm Reborn I'll Do It Again” and “Not Loud Enough”—is far from an unheard-of quantity in Europe, where he has been a part of a number of important groups, including Arild Andersen's longstanding trio with saxophonist Tommy Smith. The Italian expat/Norwegian resident has been heard on well over 100 recordings, including work in the jazz sphere with keyboardist Bugge Wesseltoft on his New Conception of Jazz (Jazzland, 2009) box set, vibraphonist Mike Mainieri's boundary-breaking Northern Lights (NYC Records, 2006), and oudist Dhafer Youssef's equally genre-busting Digital Prophecy (Enja, 2003), in addition to work with pop singer/songwriter/producer Morten Harket, he of 1980s pop stars a-ha and turntablist Pål “DJ Strangefruit” Nyhus' Mungolian Jetset.

In addition to Andersen's trio, Vinaccia has been visible in Terje Rypdal's hard-hitting Skywards trio, also featuring Supersilent/Elephant9 keyboardist Ståle Storløkken and, on occasion, Palle Mikkelborg. That group has only released one studio album—the expansive and, as ever for Rypdal, ambitious Skywards (ECM, 1997), which was fleshed out to a septet for a project originally intended to celebrate Rypdal's quarter century relationship with the venerable German label and its head, Manfred Eicher. Ultimately and equally the result, however, of a commission for the Lillehammer Vinterspillen Festival in the winter of 1996, Skywards' core constituents have toured for many years since then, including in an even more expanded form as part of Rypdal's collaboration with the Bergen Big Band in 2009 for the live performance of a new commission, Crime Scene, at the city's Natt Jazz festival. That Bergen concert was recorded and ultimately released the following year by ECM.

The Skywards trio was also documented on the six-CD Jazzland Records box set, Very Much Alive, featuring five full live performances (one, with Mikkelborg) and a bonus disc of extras, as a celebration of Vinaccia's initially beating cancer into retreat in 2009, a condition that he managed to maintain until it resurfaced again in 2017. 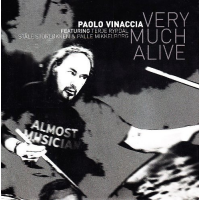 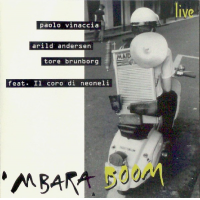 All About Jazz musician pages are maintained by musicians, publicists and trusted members like you. Interested? Tell us why you would like to improve the Paolo Vinaccia musician page.