His work with singer Len Udow took him to Winnipeg one Summer around 1970, where he met Richard Condie and wrote the music for Richard's first animation, “Oh Sure”. So began a friendship which continues today; Patrick has scored all of Richard's animations including the Academy Award nominated classics The Big Snit and La Salla and most recently, Etudes and Impromptus.

Patrick has worked with many other animators, including David Fine and Alison Snowden for whom he scored the Oscar winner Bob's Birthday and all 52 episodes of the resulting TV series Bob and Margaret, seen around the world. There are links to many of these shows from Patrick's Animations page.

In demand as a producer, Patrick created the evocative soundscapes and was associate producer on the million-selling Classical Kids productions Mr. Bach Comes To Call, Mozart's Magic Fantasy, and Beethoven Lives Upstairs, and he has produced albums featuring artists such as Holly Cole, The Flying Bulgar Klezmer Band, The Lafayette String Quartet, and Michael Jones.

Blue Night, described by Heartsong Review as ...”electronic music at it's best...captivating! “ and Strange Rain were released in 1995 and 1996.

Critics greeted his first album, Ancient Ships...as “the surfacing of a major talent”, possessing “an enormous sense of calm and joy”. Keyboard noted the music's “clarity and grace”. Released in 1980, Ancient Ships is now available on CD.

Released in 1982, Downbeat gave Bells Of Earth four stars, Cadence called it “the most distinctive solo piano LP of the previous two years” and The Montreal Gazette described it as...” a refuge in troubled times”.

Of 1985's Small Circus, The Globe and Mail said “The harpsichord pieces team with ideas and roll along with a wonderful kinetic sort of energy; the instrument has never been as funky....”.

Of his solo piano concert at The Montreal International Jazz Festival, The Montreal Gazette wrote...”positively spiritual...the stunning material he played to an awe-struck crowd ranged freely from Bach to boogie, with flat-out jazz, romance and the hypnotic music of the East filling in the spaces in between...he kept the audience in mute wonder with the delicate beauty of his melodies, superhuman left hand patterns, and a right that moved with the delicacy of a butterfly in flight.”

Patrick continues to perform in concert and teaches improvisation, composition and song writing at the Victoria Conservatory of Music, Victoria BC.

In concert he plays a mix of piano music both composed and improvised, and songs, mostly originals, with some favorites ranging from George Gershwin and Harold Arlen to Bruce Cockburn and the Beatles.

Amos And The House Of... 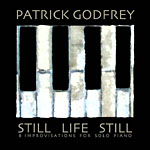 All About Jazz musician pages are maintained by musicians, publicists and trusted members like you. Interested? Tell us why you would like to improve the Patrick Godfrey musician page.