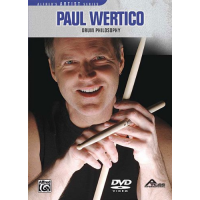 Longtime percussionist for the Pat Metheny Group, Paul Wertico is widely acknowledged as one of the premier players in jazz drumming. His unique approach to the drums is as much mental as it is physical. His tutorials cover a full analysis of the performances included in Paul Wertico's Drum Philosophy DVD to give drummers great insight into the philosophy he employs when he sits down at the drum set.
In reviews, Modern Drummer included Paul Wertico's Drum Philosophy in their list of the best drum videos in the last 25 years in their article “THE HIT LIST: Drumming Videos That Set The Standard,” and wrote “This exceptional reissue is one of the most valuable videos on the market for the advanced drummer.”; DRUM! magazine wrote “No mere instructional video, Paul Wertico's concise offering shows the former Pat Metheny Group drummer's extraordinary musicality and intuitive approach to the instrument parlayed into an enjoyable if unconventional 110-minutes of instruction.”; and Drum.com wrote “Paul Wertico Drum Philosophy offers a framework to playing the instrument not just as a drummer, but as a true musician...it really does represent a fresh approach to the drums from the perspective of pure musicality.”

All About Jazz musician pages are maintained by musicians, publicists and trusted members like you. Interested? Tell us why you would like to improve the PAUL WERTICO'S DRUM PHILOSOPHY [DVD] musician page.