Paul Musso is an Associate Professor and Area Head of Music Performance in the Music and Entertainment Industry Studies Department at the University of Colorado Denver. Paul has been with CU Denver for twenty-six years. He was director of the UCD jazz and commercial guitar program for fifteen years and has taught over twenty music courses including: Fretboard Harmony, Fretboard Melody, Commercial Guitar Styles, Applied Guitar, Jazz Theory, Jazz Guitar History, Songwriting, Improvisation and Acoustic Guitar Ensemble. Musso has won awards for his college teaching and service as well as Citysearch Denver’s Best Guitarist of 2000. His most recent publication, Introduction to Music: an Interactive Approach, was released in early 2012. He is the author of several Mel Bay publications for jazz guitar: Graded Fingerstyle Jazz Guitar Solos, Improvising With Mini-Arpeggios and Fingerstyle Jazz Guitar Chord Soloing. Paul is a co-author of Mel Bay's Master Anthology of 2000 Jazz Guitar, where Paul shares the bill with guitar greats Johnny Smith, John Abercrombie, Buckey Pizzarelli, George Van Eps, Andy Summers and many others. Paul is a freelance guitarist and has performed in several diverse jazz, Latin, Gypsy, pop and classical ensembles including: the Colorado Symphony, the Boulder Festival Orchestra and the Aspen Music Festival Orchestra. Paul has performed in venues throughout Europe, Mexico and the United States including the Roulette in Brooklyn, Ronnie Scoot’s in London, the Tijuana Cultural Center, the Aspen Music Festival, and the Westcliff Jazz Festival.

"Tonescapes" received recognition on Westword Magazine's "Moovers and Shakers List," a compilation of the best Denver based albums released in 2011.

“Musso dotes on each and every note, listening to them swing and ring.” - Marc Myers, JazzWax.Com

“Musso has an understated, fluid and lyrical handle on the guitar, which fits quite well with the rest of the players on the disc.” - Jon Solomon, Westword 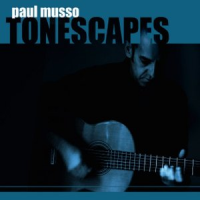 All About Jazz musician pages are maintained by musicians, publicists and trusted members like you. Interested? Tell us why you would like to improve the Paul Musso musician page.