Paul Van Ross leads one of the most exciting and energetic jazz ensembles on the Melbourne Jazz scene today. Paul is a seasoned performer of extraordinary versatility specializing in woodwind instruments, in improvised or more classical based settings.

In 2013 Paul visited New York, Cuba and Europe for a musical intensive, recording 2 new albums and furthering his musical skills.

Paul has toured the world performing at clubs & hotels and co-led 13 tours to New Zealand. He has released 3 albums under his own name and is active as a performer and recording artist. His latest album The Buck Stops Here was released at end 2012 and his trio toured New Zealand in 2013 to promote his latest album.

He has performed / recorded with some of the best musicians in the world including:

Read more articles
“On ballads, (Paul) could wring a tear from a walnut and when playing uptempo he navigates the terrain with ease. His compositions are engaging.” – John Fenton

“There is something different about tenor players who have studied under Garzone and Paul fits that bill. His rapid fire lines and fluidity never obscure the musical ideas that flow from his horn.” – John Fenton

“This is a wonderful example of the creative musical energy of Australian musicians and especially the younger generations who, while respecting the tradition of the older jazz players, are pushing into the future.” – Dr Tony Gould

“Hard fast and exciting playing…with great ideas….that’s what I like about Paul Van Ross and his music…check him out.” – George Garzone

“As a composer, Van Ross has a strong musical palette that’s rooted in traditional swing and progressive cool, where a track such as the poetic ballad Uncle DJ, is as tight-knit as chainmail with the elasicity of Lycra, while there’s a touch of the Crusaders and early period George Benson in the Sam Rivers-inspired Off With The Fairies.” – Mike Alexander

Specializing in saxophone & flute - mainstream & improvised music. All levels. Contact me if you would like more information. 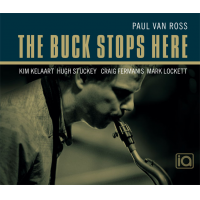 All About Jazz musician pages are maintained by musicians, publicists and trusted members like you. Interested? Tell us why you would like to improve the Paul Van Ross musician page.