Pepper Adams was one of hard bop's most significant baritone saxophonists. His dark, hearty tone on the horn and driving rhythmic sense provided the antithesis to the lighter, floating (and consequently more popular) styles of Gerry Mulligan.

His family moved to Rochester, New York when he was young and in that city he began his musical efforts. That said his family's later move to Detroit, Michigan, a suburb of which was his birthplace, would be more important to his career. This occurred when he was sixteen and in Detroit he met several musicians who would later be important to his career, one example being Donald Byrd. He also became interested in Wardell Gray's approach to the baritone saxophone and indicates he and Harry Carney were his baritone influences. He also spent time in a United States Army band and briefly had a tour of duty in Korea.

He later moved to New York City where he briefly worked in 1958 with Benny Goodman and for a much longer, if sporadic, period with Charles Mingus. He later became a member of the Thad Jones/Mel Lewis Big Band from 1965 to 1978. He also co-led a quintet with trumpeter Donald Byrd with whom he recorded a live date, 10 to 4 at the 5 Spot featuring Elvin Jones. 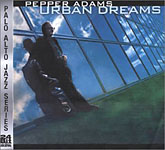 All About Jazz musician pages are maintained by musicians, publicists and trusted members like you. Interested? Tell us why you would like to improve the Pepper Adams musician page.