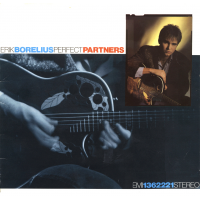 Pressrelease PERFECT PARTNERS (EMI 1986). It all started with organ, guitar and drums in a basement in Malmoe, in southern Sweden, eight years ago. Jens Johansson playing the organ, his brother, Anders on the drums and myself on the guitar (Both Jens and Anders are now in the U.S playing in Yngwie Malmsteens band.) The songs had titles like “The kidney-dead punk boots”, “Respirator slime”, “Asphalt in your ear” and “Parrot illness”. The music was just as sick! Today I am 23, I live in Stockholm and my taste for music has changed over the years. The music is more healthy and the titles have a different character. As for example “No Fool”, “Never Been To France”, “My Friend”, “For Free”, “Soft Sea”, “Sun, Summer”, “Black Sunday” and “Devils Cry” – melodies from my first LP. Up to the fall of 1982 I only played the electric guitar. An all-night jam session with one of the best acoustic guitar players in Sweden made me think differently. I realized that the sound and the temperament of the acoustic guitar suited my way of composing and improvising. After doing my military service I began playing full time in the fall of 1983. Being with a guitar eight hours a day is quite demanding. But I felt that I had no choice. In the summer of 1984 I sent a demo to EMI and it was a wonderful feeling when I got word that EMI was interested and there was probably an LP-production in the pipeline. What I know about music, I have learned through listening. I am completely self-taught and I have always felt a great need to compose. I want my music to tell a story. The most important thing is to have intensity variations in the melodies so the story moves forward. Many people think that musicians with extreme technique lack feeling. For me it’s the exact opposite. Good technique means that I can realize musical ideas without stumbling on the strings. It feels as if I skip the step between the idea and the result; i.e. the technical presentation. The melodies in my first album were originally composed for two guitars. But it soon became obvious that more instruments would fit in perfectly on many of them. We were looking for two musicians that would give rhythm and weight and we found two of the best, Magnus Persson (drums and percussion) and Teddy Walter (acoustic and electric bass). Claes von Heijne plays the keyboard and has a wonderful synth solo on “Exhausted”. Leif Larsson also plays the keyboards and he definitely gave my music a new dimension. On the tenor- and soprano-saxophone David Wilczewski. Marie Fredrikssons wonderful voice on the Joni Mitchell song “For Free”. Many thanks to Björn Norén in EMI Studio 1, who recorded and did a great deal of the mixing.

All About Jazz musician pages are maintained by musicians, publicists and trusted members like you. Interested? Tell us why you would like to improve the Perfect Partners musician page.