I was Born in Karvina in the former Czechoslovakia, August 5th, 1963, I was always interested in music from an early age. When I was 10 I was given a clarinet, which was not my first choice, I wanted a saxophone but the price was prohibitive so I played the clarinet until I was 15, when I was given a school saxophone to practice and start having lessons.

Whilst at art college in Cambridge, I was first exposed to jazz, and bought my first saxophone, I started having lessons with Kevin Flanagan an American who used to play with amongst others, Tommy Chase in the 80's, he hipped me to Bird, Rollins, Lester Young, Coleman Hawkins, Hank Mobley and Coltrane, luckily the college where I was studying had a music department, so I was able to take advantage of their sizeable jazz collection and get to know the music of some of the greats. Since then other influences include Sonny Stitt, Jackie McLean, Charles McPherson, Cannonball Adderley, George Coleman, Pepper Adams, Gary Smulyan, Harry Carney, Monk, Victor Feldman, Wynton Kelly, Red Garland, Blue Mitchell, Lee Morgan, Paul Chambers, Philly Joe Jones, Art Blakey, Thad Jones, Duke Ellington and Billy Strayhorn amongst many others.

Over the years I've played both alto and tenor but 3 years ago I got my first baritone and subsequently I felt that for my first CD I'd play it exclusively. Deciding who to use as sidemen for the recording wasn't a difficult choice, over the years I've had the opportunity to hear and play with these artists and I knew they would fit the bill perfectly, no matter what kind of material was put in front of them. These musicians are heavily steeped in the bop tradition, as you'll discover if you listen to any of the tracks, Steve Brown, Dominic Howles and Leon Greening are a truly solid, swinging rhythm section, who lay down a great groove that makes playing with them such a pleasure. Individually and on occasions collectively you can catch these musicians in various settings and they each have that spark of creativity and energy that make them the first call for so many. Steve Fishwick, whether playing trumpet or flugelhorn has the ideas, execution and sound to shine in any setting, just listen to the stunning 16th note line he executes in his solo on Ceora to get an idea. Show less 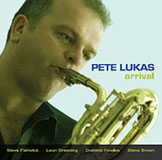 All About Jazz musician pages are maintained by musicians, publicists and trusted members like you. Interested? Tell us why you would like to improve the Pete Lukas musician page.