Peter H. Bloom, flutes/saxophones, concertizes widely in the U.S., Canada, Europe, Asia, Australia and New Zealand and is featured on 47 CDs from labels including Leo Records, 9Winds, SONY Classical, Dorian, and Newport Classic. His career encompasses exploratory jazz, new and improvised music, jazz standards, blues, bebop, and diverse chamber music from the Renaissance to the 21st century. He has worked with acclaimed composer-trumpeter Mark Harvey since 1969, has performed with the Aardvark Jazz Orchestra since 1976, and appears on 16 Aardvark CDs, including 10 discs on Leo Records. The latest additions to Bloom's discography are A Rite for All Souls, a newly discovered recording of a 1971 concert by the trail-blazing Mark Harvey Group (Americas Musicworks, July 2020), and Faces of Souls, The Aardvark Jazz Orchestra on Leo Records (2020).

Bloom has performed with such jazz luminaries as Charles Neville, Jaki Byard, Sheila Jordan, Geri Allen, Ricky Ford, Jay Clayton, Walter Thompson, and Raj Mehta. With Aardvark members, he recorded improvised music for the DVD series Treasures from the American Film Archives, which The New York Times called “one of the best sets of the year.” Peter H. Bloom performs regularly in duos and trios with pianist John Funkhouser, guitarist Mark Leighton, and bassist Dave Zox. Bloom has been a member of Kate Matson's FiLmprov (melding improvised music with animated films) since the ensemble's creation in 1996. He has appeared with the Jazz Expansions Orchestra, Composers in Red Sneakers, Underground Composers, the MIT Festival Jazz Ensemble, the International Flute Army, Back Cove Contemporary Music Festival, and Todd Brunel’s Vortex Series for New and Improvised Music, among others. A champion of new music, he has given premieres of works by Mark Harvey, Elliott Schwartz, Richard Nelson, Richard Cornell, Elizabeth Vercoe, Pamela Marshall, Narong Prangcharoen, Edward Jacobs, Karl Henning, Len Detlor, Marianela Maduro, Matt Samolis and others. He is a winner of the American Musicological Society’s Noah Greenberg award. Bloom has given lectures/workshops/master classes across the globe on such diverse topics as improvisation, new music, jazz standards, and historical performance, including numerous lecture-recitals at the Museum of Fine Arts Boston. Bloom is contributing editor for Noteworthy Sheet Music, an online resource specializing in downloadable, rare editions of music for flute, alto flute and other instruments.

Allaboutjazz.com praised his “hip, jazzy flute work,” and ArtsFuse wrote, “his solos on flute and amplified flute are always highlights of a performance,” while Jazz Improv hailed the “exquisite melody caressed lovingly by Peter Bloom's lead flute, …the improvisations growing organically out of the theme.”

Bloom’s jazz career began in 1969, in a collaboration with composer/trumpeter Mark Harvey. The two musicians recorded an LP called Duets at Boston’s Old West Church in 1969, including a track later titled Intuition No. 1, (“a revelatory experience, one that opened up entirely new vistas in terms of freedom, spontaneity, and collective creation” – Mark Harvey, Coda Magazine, 2007). Jazz critic Steve Elman described Intuition No. 1 in a retrospective (ArtsFuse, October 8, 2012) as:

“a meditative 11 minutes of long tones, chance consonance, considered dissonance, careful cooperation, and a very assured use of space, all of which lead to an unexpected and very satisfying resolution. There are a few freak effects, but they come across as atmospheric rather than provocative. This is remarkably mature, especially considering that it is contemporaneous with the first recordings of the Art Ensemble of Chicago, when that band was living and working in France, long before it had achieved significant attention in the US. Even at this early stage in their performing life, Harvey and Bloom have already achieved great self-discipline and seem to know what steps are needed next.”

In 1972, The Mark Harvey Group (Bloom and Harvey, with percussionists Craig Ellis and Michael Standish), released an LP, praised in Free Jazz as “totally free improv, with no sense of direction, just in the moment ideas which surface one after the other, but to the musicians credit, they manage to keep the whole concept very coherent, accessible and captivating.” Bloom and Harvey have continued their decades-long collaboration in The Aardvark Jazz Orchestra, The Aardvark Jazztet, the Aardett, and FiLmprov. Show less 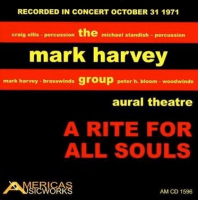 All About Jazz musician pages are maintained by musicians, publicists and trusted members like you. Interested? Tell us why you would like to improve the Peter Bloom musician page.