Peter Parcek’s daring, incendiary and soulful style is a distinctive hybrid. He weaves rock, gypsy-jazz, country, folk, and blues—especially blues—into a tapestry of melody, harmony and daredevil solos that push those styles to their limits without sacrificing the warmth of his own personality.

Peter calls his approach “soul guitar,” an appellation that alludes to his playing’s depth of feeling and character, as well as its deepest roots in classic American music. But Peter’s sensibilities are equally attuned to the future.

Peter’s journey as a musician began when the Vietnam War erupted and he graduated high school. With the blessings of his mother and the help of a family friend, he relocated to London, England, and found himself in the thick of the British blues explosion.

“I got real lucky,” he recounts. “Whenever I could afford it or sneak in, I could see Eric Clapton, Jeff Beck and Peter Green in clubs, as well as many other great guitarists who were on the scene, but never made it big.

Daunted by the six-string virtuosity on display all around him, Peter put down his guitar to sing and blow harmonica and joined a band, playing rooms like the famed Marquee Club—one night on a bill with the Pink Floyd. But fate intervened. He was returned to the States for lack of a British work permit

Once back in Middletown, CT, Peter began witnessing great American blues artists in concert: Skip James, Muddy Waters, Albert King, Jimi Hendrix, B.B. King, Albert Collins, Buddy Guy. “I would sit as close as possible so I could see exactly what they were doing on the guitar,” he says. “It was an amazing education.”

Decades later, he would receive a superlative from Guy. “I met some people who knew Buddy and took me to his dressing room after a show,” Peter says. “I felt a little out of place, because I didn’t really know anybody. So out of nervousness, I guess, I just absent mindedly picked up one of Buddy’s guitars, unplugged, and started playing. After a while I realized the room was quiet and I looked up, and Buddy was watching me with his finger pressed to his lips for silence.

Peter, who is remarkably modest about his virtuosity, says he didn’t get serious about his instrument until he moved to Massachusetts. “That’s when I developed from a guitar owner to a guitar player, by practicing eight to 10 hours a day,” he explains.

Between jobs as a school counselor and instrument salesman, Peter joined his first serious band, Boston’s Nine Below Zero. Their visceral take on classic and original blues won them regional acclaim and led to Peter playing on recordings for the piano legend Pinetop Perkins and a stint as Perkins’ touring bandleader.

“It was an amazing time,” Peter relates, “and it inspired me to take the reins of my own music and form a band.”

“What I try to bring to any music I play, but especially to blues, is something I learned from Skip James when I saw him perform at Wesleyan University in the ’60s,” says Peter. “He played beautifully, with real elegance, and conducted himself in a gentlemanly manner. But people kept talking, so at one point he stopped playing and announced, ‘Mr. Skip would appreciate it if you would stop perambulating when he is expressing.’ And then he left until things quieted down.

“That made something click in me. Skip showed me that it was right to play blues with dignity and style, and to express and conduct yourself as an artist. He obviously put his entire soul into what he was doing on a lot of levels. And that’s what I try to do whenever I pick up a guitar.”

Be sure to see Peter pick up his guitar with his band, as he channels his “soul guitar” sound in explosive live performances throughout the greater Boston area and beyond. Show less 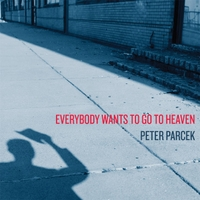 Everybody Wants to Go...

All About Jazz musician pages are maintained by musicians, publicists and trusted members like you. Interested? Tell us why you would like to improve the Peter Parcek musician page.