A sought-after saxophonist and doubler, multi-faceted musician, bandleader, composer and arranger based out of New York City for the last seven years, Peter can be found on any given day of the week performing in stellar ensembles and venues both large and small. He is known for his big sound and fluency on all the saxophones as well as clarinet and flute. He has performed in New York City at the Highline Ballroom, Smalls, Smoke, Brooklyn Bowl, BB Kings, Zinc Bar, NuBlu, Littlefield, Madison Square Garden, Showman's, Le Poisson Rouge, the Blue Note as well as many others venues across the United States and Europe. with many many fantastic artists and musicians.

Peter's debut album, “ The Straphanger's Playlist” was released on March 31st, 2015. The music developed over a year's time, the album features a sextet at its core, with additional percussion and a string section on individual tracks. Additionally, Peter took a cue from legendary composer Steve Reich and, in the manner of Reich's Counterpoint pieces, recorded the last track on the album, a saxophone quintet, by overdubbing himself playing all five parts on the four members of the saxophone family. He called on some of the most bada$$ musicians in NYC (world?) to realize this project: Jay Jennings (tp), Isamu Macgregor (p), Panagiotis Andreou (b), Aki Ishiguro, (g), and Mauricio Zottarelli (drums). The album is currently available in all major online stores and in the store section on this site in either in download or physical form (on a 2GB flash drive). 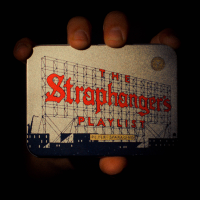 All About Jazz musician pages are maintained by musicians, publicists and trusted members like you. Interested? Tell us why you would like to improve the Peter Sparacino musician page.