After studying the classical piano, the guitar and harmony, Phil Abraham was seduced by jazz and the trombone, on which he is self-taught. His stylistic evolution is parallel to the history of jazz, and even if he is a modern soloist today, he has worked with a wide variety of great musicians.

Phil has taken part in more than sixty albums, eleven with his own group, with which he won many prizes. He has often been invited in big bands as a soloist. He took part in many recordings and concerts of the big band of the Belgian Radio (BRT). Phil Abraham also devotes his career to teaching, training courses and master-classes. He was a teacher of vocal improvisation in Antwerp and Brussels. He is now a trombone teacher at the Brussels Royal Conservatory, at the National Conservatory in Metz (France) and at the National Conservatory in Douai (France)

Was chosen by the Belgian Radio (BRT) to represent Belgium in the Big Band of the European Broadcasting Union in Strasbourg (France). Was invited in 1994 as a soloist at the Moscow Concert Hall for a TV concert with the Moscow Big Band. Was the first Belgian Jazzman to be a member of the “Orchestre National de Jazz” in France, that he joined for 3 years with Laurent CUGNY, then stayed with Didier LEVALLET for additional 3 years. Replaced Bob BROOKMEYER in Michel PETRUCCIANI sextet, with Victor JONES (drs), Anthony JACKSON (bass), Flavio BOLTRO (tp) and Stefano DI BATTISTA (sax).

Participated (1998) in the album “Jazznavour” of the French singer Charles AZNAVOUR, in which he played all the trombone parts. Other participants include Jacky TERRASSON (p), André CECCARELLI (drs), Remy VIGNOLO (b). Arrangements are by Pierre DREVET (p) and there are other celebrity guests like Michel PETRUCCIANI, Diane REEVES, Richard GALLIANO and Eddy LOUIS.

Was a member of the International Dusko GOYKOVICH Big Band (February 2004) for a big TV-concert in Belgrade supported by the Minister of Culture.

Has developed a new jazz trombone for the Courtois Company, the Xtreme AC 430T model.

Was invited in Seattle in May 2013 for concerts and master-classes and recorded a new album in New York in February 2014 with Sylvain Luc (g), Hein van de Geyn (cb) and Mino Cinelu (perc) + Bria Skonberg (tp) - guest.

1988 : first Prize at the International Jazz Contest in Sorgues (France) 1989 : Prize of the Best Soloist at the "Concours de la Défense" in Paris 1998 : chosen as the best Belgian and European trombone player by the listeners of the Belgian radio and the Belgian critics 1999 : elected once again the best Belgian and European jazz trombonist 2000 : second Prize at the International Contest of jazz soloists in Monaco. AWARD BEST JAZZ SONG The Akademia http://www.theakademia.com/rwvWeR8JVf3rqeEzWp8r.html

PRESS CUTS PHILABRAHAM “Phil Abraham sings and makes his instrument sing as well he distills jazz blended in pleasure and humor.” (VERS L'AVENIR) ”This is a great little trio who play off one another in perfect balance... Kinda reminds me of Bill Evans classic trio... in terms of how balanced they were and how well they played together. This trio approaches that level.” (JAZZREVIEW) ”... the subtle and tender voice of Phil Abraham lingers above the melodies, refreshes the brain and lightens the spirit.” (LA NOUVELLE GAZETTE) ”A trio of seducers. Happiness at its row state

PRESS CUTS PHILABRAHAM “Phil Abraham sings and makes his instrument sing as well he distills jazz blended in pleasure and humor.” (VERS L'AVENIR) ”This is a great little trio who play off one another in perfect balance... Kinda reminds me of Bill Evans classic trio... in terms of how balanced they were and how well they played together. This trio approaches that level.” (JAZZREVIEW) ”... the subtle and tender voice of Phil Abraham lingers above the melodies, refreshes the brain and lightens the spirit.” (LA NOUVELLE GAZETTE) ”A trio of seducers. Happiness at its row state. That is precisely what Phil Abraham and his trio offered... The Belgian trombone player retains all the winning cards of seduction... Master of his art, Phil Abraham alternates between his trombone and vocal performance... Few notes were sufficient to evoke a well being, as of the very first measures... “ (LE JOURNAL DE S ET L) ”With a voice sounding approaching that of Chet Baker and scat improvisations that bring to mind those of Bobby McFerrin, the voice of Phil Abraham is a vocal mirror of what he already input to the trombone. (SO WHAT) ”His improvisation is effortless and his expression perfectly reflects the man he is: tender, sweet, calm, happy, never aggressive. His way of singing reminds of Chet baker... On the trombone it is Jay Jay to whom he mostly resembles but he can come up with any style on demand” (JAZZHOT) ”... A caress of sonority. Original choice of pieces instrumental richness sound quality beyond reproach, ... The voice of Phil Abraham smitten and pacifies...” (JAZZMAN) ”...Sweet talking trombone... foundations for a music that drinks its vitality in a light swing, alive and colored... Supple, coherence, pleasure of a fine and relaxed game to listen to without restrain.” (JAZZMAGAZINE) ”Faire pleurer son instrument, tout en préservant un son d'allégresse, constitue la marque d'épanouissement d'un talent rare.” (LE SOIR MAGAZINE) PhilAbraham.com

Make your trombone sing and talk. Don't play to play fast, high, loud, much, long times, complicated things and for sale ! Just search for the beauty. Jazz is a kind of music and music is an art. 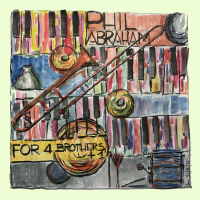 All About Jazz musician pages are maintained by musicians, publicists and trusted members like you. Interested? Tell us why you would like to improve the Ilja Reijngoud musician page.