Phil Berkowitz, a San Francisco Bay Area based blues harmonica player and vocalist, has brought his unique and energetic musical style to audiences for over a decade. His most recent venture, a CD entitled “All Night Party,” testifies to the talent and dedication of this exciting, young performer. Phil Berkowitz demonstrates creativity and a powerful drive to entertain audiences of all ages with his dynamic vocals and blues-soaked harmonica riffs. Backed by seasoned musicians in his nationally touring band, he rigorously seeks venues in which to share his passion for the blues with those who appreciate the roots of today's popular music. Phil is a New Jersey native and the 4th child in a family of six. He relocated to California in early 1989 to complete his college degree. It was during this time at Sonoma State University that he began playing the harmonica and fell in love with all forms of blues and jazz influenced music. He decided to front a band of his own and embarked on his lifelong journey of mastering every facet of the diatonic and chromatic harmonica. He has performed with a variety of top blues and jazz musicians such as Danny Caron, Sean Carney, Bill Stuve, Mitch Woods, Steve Freund, Freddie Hughes, Wendy DeWitt, Charles Wheal, Terry Hanck, Dave Workman, Brenda Boykin, Jon Lawton, R.J. Mischo, Tom Rigney, Gary Smith, David Barrett, Kid Anderson, Kenny Blue Ray, Little David Rose, Lisa Kindred, Johnny Nitro, Billy Branch, and the late Gary Primich just to name a few

. In 1996, Phil founded The High Rollers, now known as The Dirty Cats, a consistently hard working local blues band that still brings crowds to their feet with a blend of rock-solid rhythms and danceable grooves that stay true to 50's New Orleans R&B, West Coast Jump and heavy hitting Chicago blues. The High Rollers released two fine recordings, “The High Rollers” in 1999, and “High Time” in 2001. High Time received critical acclaim from several blues magazines and was produced by Tim Eschliman, a renowned San Francisco Bay Area musician who has played with or produced for legends such as Elvis Costello, Nick Lowe, and Johnnie Johnston (Chuck Berry's piano player for 25 years). Phil created and wrote nine of the 12 songs and collaborated with Danny Caron (guitarist and band leader for the late Charles Brown) on several of them. The High Rollers played at many Northern California venues and various festivals including the Auburn Barbecue & Blues Festival, the Fresno Valley Blues Festival, the Burlingame Art & Jazz Festival, and as headlining band at the JuneBug Blues Festival in Payson, Arizona. The High Rollers were also regularly featured at the San Francisco Market Street Association's highly acclaimed People in the Plazas Summer noontime outdoor concert series. The band played live on radio with the webcast pioneer KPIG's Please Stand By show, KZSU's Byrd of Paradise blues show, and helped support public radio station KKUP by performing on their Blues Marathon fundraiser day. In 2004, Phil set out to record the music of Louis Jordan (legendary vocalist, saxophone player, and band leader). He joined forces again with Danny Caron, who played guitar and co-produced the recording, “Phil Berkowitz Plays … Louis' Blues: The Music of Louis Jordan.” Phil recruited three musicians from the Bay Area sextet Stompy Jones, a widely acclaimed swing group with an extensive knowledge of Jordan's vast discography. The end result is a uniquely enjoyable mixture of both popular and obscure Louis Jordan songs that stylistically cover every era of his long career. In place of a horn section, Phil takes on these arrangements and solos with his harmonica. This highly spirited performance not only re-introduces Jordan's music to a whole new audience, but also channels the high energy and witty charm that made Jordan so famous and inspirational to those who were familiar with him. Throughout the summer of 2005, Phil's CD, “Louis' Blues,” received national and international airplay on hundreds of blues radio programs. In June of that year, “Louis' Blues” was given a most favorable review in Blues Revue Magazine (Issue 94). More positive reviews would follow in Living Blues, Blues in Britain, Virus de Blues, Blues Bytes, and Jazz Now. In September, the CD appeared at #20 on The Living Blues Magazine Radio Charts (Issue 180, Volume 36 #5), alongside other artists such as Elvin Bishop, Marcia Ball, Little Milton, Delbert McClinton, Magic Slim and Rod Piazza. In September of 2005, Phil appeared as one of the headlining acts at The Soul Shine Blues Festival in Bascom, Ohio. It was during this venture to the Midwest that Phil was accompanied by The Sean Carney Band, 2007 Memphis IBC winners, from Columbus, Ohio. Since, that 2005 tour, Phil has formed an enduring professional and personal relationship with Sean. In March of 2006, Phil toured through the Pacific Northwest with his Bay Area band, Louis' Blues, performing at major blues venues in Portland and Seattle. In May of 2006, Phil was one of the featured performers in R.J. Mischo's 1st annual Bay Area Blues Harp Blast at The Mojo Lounge in Fremont, CA, which also featured Mark Hummel, Gary Smith, Birdlegg, and Jimmy Dewrance. In the fall of 2006, Phil played again at The Soul Shine Blues Festival with The Sean Carney Band. They also toured throughout the Midwest, playing at renowned venues such as The Slippery Noodle in Indianapolis, Fat Fish Blue in Cleveland, and the world-famous House of Blues in Chicago. In addition to touring with Sean Carney, Phil was a featured artist on Sean's most recent and widely acclaimed recording, “Life of Ease,” which has been regularly played on many radio programs worldwide. In the spring of 2008, Phil traveled to Brinkley, Arkansas, the birthplace of Louis Jordan, and performed at The Choo-Choo Ch’Boogie Festival. He also was among the headliners at The renowned Eureka Springs Blues Festival. On July 8th, to celebrate the 100th anniversary of Louis Jordan’s birthday, Phil played to a full house at the legendary Yoshi’s Jazz Club in San Francisco, CA. Currently, Phil has just released a new CD, “All Night Party,” which contains mostly original and diverse material that ranges from Swing, Chicago Blues, New Orleans R&B, Soul, and Country Blues It was co-produced by Danny Caron and features talented musicians such as Sean Carney and Bill Stuve. “All Night Party” has been regularly played on XM satellite radio’s Bluesville station and is quickly making a strong and lasting impact on the blues world at large. 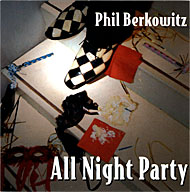 All About Jazz musician pages are maintained by musicians, publicists and trusted members like you. Interested? Tell us why you would like to improve the Snooky Pryor musician page.