Phil Harris (born Wonga Philip Harris) was an American singer, songwriter, jazz musician, actor and comedian. Though successful as an orchestra leader, Harris is remembered today for his recordings as a vocalist, his voice work in animation and as a pioneer in radio situation comedy, first with Jack Benny, and then in a series in which he co-starred with his second wife, singer-actress Alice Faye, for eight years.

Harris was born in Linton, Indiana, but actually grew up in Nashville, Tennessee, and identified himself as a Southerner (his hallmark song was “That's What I Like About the South”). His upbringing accounted for both his trace of a Southern accent and, in later years, the self-deprecating Southern jokes of his radio character. The son of two circus performers, Harris' first work as a drummer came when his father, as tent bandleader, hired him to play with the circus band. Harris began his music career as a drummer in San Francisco, forming an orchestra with Carol Lofner in the latter 1920s and starting a long engagement at the St. Francis Hotel. The partnership ended by 1932, and Harris led and sang with his own band, now based in Los Angeles. Phil Harris also played drums in Henry Halstead Big Band Orchestra in the mid 1920s.

From December, 1936, through March, 1937, he recorded 16 sides for Vocalion. Most were hot swing tunes that used a very interesting gimmick; they faded up and faded out with a piano solo (these were probably arranged by pianist Skippy Anderson). This was a novel approach and quite unusual for the time.

On September 2, 1927, he married actress Marcia Ralston in Sydney, Australia; they had met when he played a concert date. The couple adopted a son, Phil Harris, Jr. (b. 1935), but they divorced in September, 1940.

In 1933, he made a short film for RKO called So This Is Harris!, which won an Academy Award for best live action short subject. He followed it up with a feature-length film called “Melody Cruise”. Both films were created by the same team that next produced “Flying Down to Rio”, which started the successful careers of Fred Astaire and Ginger Rogers. Additionally, he appeared in The High and the Mighty with John Wayne in 1954.

In 1936, Harris became musical director of “The Jell-O Show “Starring Jack Benny (later renamed The Jack Benny Program), singing and leading his band and - when his knack for snappy one-liners became apparent - joining the Benny ensemble playing Phil Harris, scripted as a hipster-talking, hard-drinking, brash Southerner whose good nature overcame his ego. His trademark was his jive-talk nicknaming of the others in the Benny orbit. Benny was “Jackson,” for example; Harris's usual entry was a cheerful “Hiya, Jackson!”. He usually referred to Mary Livingstone as “Livvy” or “Libby”. His signature song, belying his actual Hoosier birthplace, was “That's What I Like About the South.” His comic persona -- that of musical idiot -- masked the fact that the Harris Band evolved into a smooth, up-tempo big band with outstanding arrangements.

Harris married Alice Faye in 1941; it was a second marriage for both (Faye had been married briefly to singer-actor Tony Martin). The Faye-Harris marriage lasted 54 years, until Harris's death. Harris engaged in a legendary fist fight at the Trocadero nightclub in 1938 with RKO studio mogul Bob Stevens over Alice Faye after Stevens ended a romantic relationship with Faye in favour of Sharon Gunn. In 1942, Harris and his entire band enlisted in the U.S. Navy and they served for the duration of World War II. By 1946 Faye had all but ended her film career. She drove off the 20th Century Fox lot after studio czar Darryl F. Zanuck reputedly edited her scenes out of “Fallen Angel” (1945) to pump up his protege Linda Darnell.

Harris and Faye were invited to join a radio program, The Fitch Bandwagon. Originally a vehicle for big bands, including Harris's own, the show became something else entirely when Harris and Faye became its breakout stars. Coinciding with their desire to settle in southern California and raise their children without touring heavily, Bandwagon evolved into The Phil Harris-Alice Faye Show, a situation comedy with one music spot each for Harris and Faye.

“The Phil Harris-Alice Faye Show” debuted on NBC in 1948 and ran until 1954, by which time radio had all but succumbed to television. (Harris continued to appear on Jack Benny's show, along with his own, from 1948 to 1952.) Because the Harris show aired immediately after Benny's on a different network (Harris and Faye were still on NBC, whereas Benny jumped his show...including Phil Harris as his bandleader...over to CBS in 1949), Harris would only appear during the first half of Jack's show; he would then leave the CBS studio and walk approximately one block to his own studio down the street, arriving just in time for the start of his own program. He was succeeded as Benny's orchestra leader in the fall of 1952 by Bob Crosby (although the actual conductor was the show's musical arranger, Mahlon Merrick).

After the show ended, Harris revived his music career. He made numerous guest appearances on 1960s and 1970s TV shows, including the “Kraft Music Hall”, “The Dean Martin Show”, “F Troop”, “The Hollywood Palace” and other musical variety programs. He appeared on ABC's The American Sportsman hosted by Grits Gresham, and later sports announcer Curt Gowdy, which took celebrities on hunting, fishing, or shooting trips around the world.

Song hits by Harris included the early 1950s novelty song, “The Thing.” The song describes the hapless finder of a box with a mysterious secret and his efforts to rid himself of it. Harris also spent time in the 1970s and early 1980s leading a band that appeared often in Las Vegas, often on the same bill with swing era legend Harry James.

Harris was also a close friend and associate of Bing Crosby and appeared in an episode of ABC's short-lived “The Bing Crosby Show” sitcom. After Crosby died in 1977, Harris sat in for his old friend doing color commentary for the telecast of the annual Bing Crosby Pro-Am Golf Tournament. Harris said of Crosby's death: “I have grown up to learn that God doesn't make mistakes. Today, I'm beginning to doubt that.” An old episode of The Phil Harris-Alice Faye Show began with Harris telling the story of how he once won the tournament.

He worked as a vocalist and voice actor for animated films, with performances in the Disney animated features “The Jungle Book” (1967) as Baloo, “The Aristocats” (1970) as Thomas O'Malley, and “Robin Hood” (1973) as Little John (who is similar to Baloo).

“The Jungle Book” was his greatest success in the years following the end of his radio career. As Baloo the Bear, he sings one of the film's showstoppers, “The Bare Necessities,” a performance that introduced Harris to a new generation of young fans who had no awareness of his radio appearances. Harris also joins Louis Prima in “I Wanna Be Like You,” delivering a memorable scat singing performance.

In 1989, Harris briefly returned to Disney to once again voice Baloo, this time for the cartoon series “TaleSpin”. He was later replaced by actor Ed Gilbert. His last animated film project was the 1991 film “Rock-a-Doodle”, directed by Don Bluth, in which he played the friendly, laid-back farm dog Patou.

Harris was a longtime resident and benefactor of Palm Springs, California, where Crosby also made his home. Harris was also a benefactor of his birthplace of Linton, Indiana, establishing scholarships in his honor for promising high school students, performing at the high school, and hosting a celebrity golf tournament in his honour every year. In due course, Harris and Faye donated most of their show business memorabilia and papers to Linton's public library.

Harris died of a heart attack in Palm Springs 1995 at age 91. Alice Faye died of stomach cancer three years later. Two years before his death, Harris was inducted into the Indiana Hall of Fame. Both Harris and Faye are interred at Forest Lawn-Cathedral City in Riverside County, California. Phyllis Harris was last reported living in St. Louis (she had been with her mother at her father's bedside when he died), while Alice Harris Regan was reported living in New Orleans.

Harris remained grateful to radio for the difference it made in his professional and personal life, however. “If it hadn't been for radio,” he was quoted as saying, “I would still be a traveling orchestra leader. For 17 years I played one-night stands, sleeping on buses. I never even voted, because I didn't have any residence.” Show less 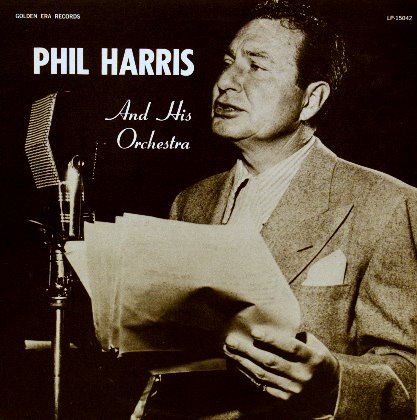 All About Jazz musician pages are maintained by musicians, publicists and trusted members like you. Interested? Tell us why you would like to improve the Phil Harris musician page.