Phil Scarff presents educational workshops and residencies on Indian classical music, world music, and jazz. Workshops are tailored to the musical level and interests of your group or audience. They are interactive, informative, entertaining, and engaging. Phil is experienced in presenting workshops to audiences of all ages, from children through adults, and of all musical levels, from general and family audiences through college-level music educators. Contact us for more information.

Music can be provided for weddings, functions, and corporate events, including diversity and multicultural programs. For Hindu wedding ceremonies, we recommend shehnai-style music, focusing on festive ragas. We work with the family and the priest, and take cues from the flow of the ceremony so that the music we provide best enhances the ceremony. We recommend a blend of Indian classical music and jazz for cocktails, dinner, or other background music. This is a very effective way of providing music that bridges cultures and appeals to guests of different backgrounds and cultures. Show less

“The highlight of the festival was… a performance by Saskia Rao de Haas on Indian cello with US based saxophonist Phil Scarff… The audience was thrilled… Their performance garnered an unending stream of applause.” - Dainik Bhaskar, Gwalior, India

“Phil Scarff… produces a soprano [saxophone] introduction which is so consummate it is difficult to get passed the track.” - What's New Jazz Magazine

“The highlight of the festival was… a performance by Saskia Rao de Haas on Indian cello with US based saxophonist Phil Scarff… The audience was thrilled… Their performance garnered an unending stream of applause.” - Dainik Bhaskar, Gwalior, India

“Phil Scarff… produces a soprano [saxophone] introduction which is so consummate it is difficult to get passed the track.” - What's New Jazz Magazine

“Scarff's performance on the soprano saxophone, an instrument that is completely Western, sounds as if he had been living in the North Indian tradition for centuries, absolutely naturally transmitting the subtlety of the music.” – Jazz Quad

“Phil Scarff's Indian classical performance on soprano saxophone amazed the audience... He played with a sweet, sonorous tone, soulfulness, and focus equal to those of a great Indian classical musician... The spellbound listeners were moved and touched... Scarff won the hearts of the connoisseurs.” - Tarun Bharat, Kolhapur, India

“A cerebral improviser who develops a solo logically, deliberately, and passionately.” - Jazz Now

“Scarff's virtuosity was in no doubt... superb.” - Afternoon on Sunday, Mumbai, India 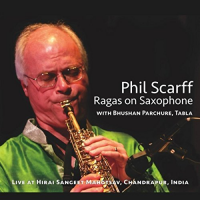 Song of the Swan

All About Jazz musician pages are maintained by musicians, publicists and trusted members like you. Interested? Tell us why you would like to improve the Phil Scarff musician page.