”Hayes has a coy and coquettish voice, lazy and sensual as Quaaludes and honey ... this singer has great things to say and the chops to say them.”

This review by C. Michael Bailey from the website, All About Jazz, beautifully summarizes the vocal qualities of Australian vocalist, Pippa Hayes. Born in the Cook Islands and based out of Queensland, music has been a part of her life since she was a young child. As Hayes recalls:

“One of my earliest memories was of my mother singing lullabies with a baby in her arms...I remembered then it would've been a moment of respite for her as she was a busy person.”

As she continued to grow, more music would be introduced into Hayes’ life, largely thanks to her Nanna. It was her who pointed out to a young Pippa how to listen to individual voices in church choirs and through her own singing, introduced a growing young mind to the music of Irving Berlin and George & Ira Gershwin. Listening turned to performing as Hayes began singing “God Save The Queen” during assemblies at her primary school

Hayes’ love for music led to her delving into the work of many of the composers that her Nanna had introduced her to as a child. From there, she went on to discover other musicians and vocalists whose work she loved, including the jazz work of Louis Armstrong, and the classical cello playing of Jacqueline du Pre. In terms of vocalists, Hayes found herself drawn to famed singers Maria Callas, Joan Sutherland, Kirsten Flagstad, Jerome Hines and Luciano Pavarotti.

As much admiration as Hayes has for her favorite vocalists, she also has great reverence for the advice that jazz legend Miles Davis gave about not being a mockingbird. Just as he strived to develop his own unique sound, Hayes has tried to follow in his footsteps and interpret and perform even the most familiar of songs in her own unique way. Even critically acclaimed jazz musician, George Golla couldn’t quite place Hayes’ voice when he worked with her on her album, It Had To Be You.

Released in 2010, It Had To Be You has been gaining quite the following and for good reason. Recorded at the prestigious James Morrison Studios in Sydney, Australia, Hayes’ CD not only has a number of fantastic performances from her, but also includes arrangements from George Golla and trumpet playing from world renowned musician, Bob Barnard. The reviews have been nothing short of glowing.

“A debut album can be a hit or miss affair, an artist can either choke from the pressure or smack a home run. In the case of Australian vocalist Pippa Hayes, the result is a grand slam.” - MUSIC INDUSTRY NEWS

“It Had To Be You is a spine-tingling collection of jazz standards sung with real soul and deep-seated passion.” - TOP 40 CHARTS

It Had To Be You is just as much a reflection on Hayes’ approach to music as it is a beautiful collection of Jazz Standards. Hayes makes sure to define herself as an interpreter of music; not a songwriter. Her performance is an emotional response to how she feels about the song and how the band interacts with her; like a musical conversation. This helps to give the music an honest and natural feel to it, with an inherent space that encourages the performers to really engage the music, and the listener to take in the piece like Pippa’s Nanna encouraged her to do when she was younger.

With music being such a loving passion for Hayes, her approach to it is not one that aspires to financial success, but one that promotes the sharing of music between the performer and audience. Additionally, Hayes has a personal stake in her music, hoping that it will push her to continually grow and develop as an artist and person. In her own words:

“Music is the pursuit of aesthetic values… therefore you are constantly growing and learning; it is vitally important for the creative person to never arrive at the place where you have to stop developing, growing, working, being absorbed, learning, planning, thinking about it and trying to get better at it.”

Hayes also describes music as being like a religion to her; a path of self-discovery. If eyes are the windows to the soul, than music is the voice of it. When she hears the music of such talented artists as Lester Young, Jacqueline du Pre, and Maria Callas, she hears the sound of their soul speaking to the listener, and Hayes carries that belief and conviction into her own performances.

When not singing, Pippa Hayes is a teacher, loving wife, and mother to three beautiful children. In her free time she is an avid reader, greatly enjoying the works of Stephen King…a world far removed from that of the jazz standards she’s used to interpreting. Show less

Read more articles
”A debut album can be a hit or miss affair, an artist can either choke from the pressure or smack a home run. In the case of Australian vocalist Pippa Hayes, the result is a grand slam.” - MUSIC INDUSTRY NEWS

“It Had To Be You is a spine-tingling collection of jazz standards sung with real soul and deep-seated passion.” - TOP 40 CHARTS 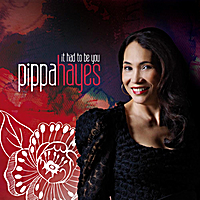 It Had to Be You

All About Jazz musician pages are maintained by musicians, publicists and trusted members like you. Interested? Tell us why you would like to improve the Pippa Hayes musician page.