From the moment Pol played his first note on an instrument, sometime in the 90’s in a small town in Luxembourg called Tétange, his curiosity was awakened to create music. After extensive tutelage at local schools in classical percussion, piano, drums and theory, a fair amount of classical orchestra as well as rock band experience and a good first imprint in the local scene, he set sails to study in Brussels and Amsterdam, earning a master’s degree “cum laude” in bass guitar in 2014. He has forged himself a strong credo consisting of two main ingredients: polyvalence and creativity. His numerous projects vary in both conception of style and the instrument(s) he plays, and since the first childhood composition try-outs (which were mainly transcribing and rearranging video-game music), he has grown to a prolific composer who is not afraid of taking advantage of his diverse musical background. Now back in Luxembourg, in the heart of Europe, Pol leads his own bands Force (a modern jazz quartet/quintet) and Urban Voyage, an 11-piece crossover mammoth project based in Amsterdam. In addition to that, he is a member of DillenDub, a co-lead electro-groove-jazz trio. He is also a welcomed sideman on the bass guitar for Pascal Schumacher, MetroMara (DE), Little Known Facts (NL) as well as on the vibraphone for Nelson Ogliastri’s Birth and Death of a Star and many other projects. Willing to share his experience with studious young music lovers, Pol is teaching in local music schools, and to keep up to date on what is happening in an around Luxembourg, he regularly hosts a radio show at Radio 100,7 FM.

Read more articles
I have never considered Charles Mingus simply as a bass player but always as a complete artist, whose role goes way beyond the playing of bass lines. With his brand new album of Urban Voyage, Pol Belardi's first steps to becoming a new era Mingus are successfully confirmed. A unique composer, bandleader and a new voice in Jazz. - Pascal Schumacher, vibraphonist, composer (LU)

Flabbergasting compositions performed by a true band that knows how to use pure energy! This music will blow you away, a new and thrilling festival act is born! - Anton Goudsmit, guitarist (NL) 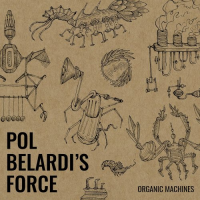 All About Jazz musician pages are maintained by musicians, publicists and trusted members like you. Interested? Tell us why you would like to improve the Pol Belardi musician page.