When you think of Nashville, jazz probably doesn’t come into your head any more than bluegrass does when you think of Detroit or polka does when you think of London. But if rising saxophonist and hometown product Rahsaan Barber has his way - and judging by the instant appeal of his terrific new album, Everyday Magic, don’t bet he won’t - a change is coming to the traditional image of Music City.

“When I tell my New York friends there are all these fantastic jazz musicians in Nashville, they say, come on, really?” said Barber, at 31 an integral part of its music scene as a performer, studio musician, and educator. “It’s tough sometimes. But as a local kid who has played with or heard a lot of those musicians, I’m really hoping to help bring more attention to them.”

Barber wrote, arranged, and produced Everyday Magic, his second album as a leader, with the support of his exceptional band, also called Everyday Magic. It features guitarist Adam Agati, pianist Jody Nardone, bassist Jerry Navarro, and drummer Nioshi Jackson. Along with The Movement, the radio-friendly 2010 debut by El Movimiento, a Latin-jazz and world music group he co-leads, Everyday Magic is proof positive that you can live in the nation’s country music capital, work with country and soul and blues artists, and still produce uncompromising, original jazz.

You know that decisively from the first cut on Everyday Magic, “Jubilee,” a bruising tenor saxophone vehicle in the John Coltrane mode that also reveals the influence of Coltrane acolyte Kenny Garrett. And jazz doesn’t get any deeper or more boisterous than “Why So Blue?,” a supercharged lowdown blues. It features trombonist Roland Barber, Rahsaan’s twin brother, who plays off his sibling’s raspy testifying on tenor with a carousing muted solo that conjures his memories of playing with the great trombonist Al Grey shortly before he died.

Rahsaan and Roland? Yes, the twins, who were born April 2, 1980, and have played and recorded together in the Barber Brothers Jazz Quintet, were named after ’60s jazz legend and revolutionary, larger-than-life spirit Rahsaan Roland Kirk (captured on the 1996 Rhino video, The One Man Twins). The name Roland was already in use on their mother’s side; their father wanted to use names that had the same initials as his own, RJB. And, said Rahsaan, “My father has a radical streak. He wanted to challenge more than a few conventions with those names. Back then, there wasn’t a high percentage of African Americans at Vanderbilt.” That’s where his parents met as students.

Music was a family affair for the Barbers. Rahsaan’s older brother, Robert, plays saxophone and has sat in with Rahsaan’s TrioSoul, featuring onetime Gatemouth Brown organist Moe Denham. Their father, a judicial commissioner in Memphis, plays bass; their mother is a singer. Their grandmother is a gospel, blues, and classical pianist who handed down her love of tenor greats Don Byas, Coleman Hawkins, and Ben Webster to Rahsaan.

Influenced by his older brother, Rahsaan took up saxophone; Roland started off in fifth grade wanting to play oboe but switched to trombone. The twins, whose musical outlook was shaped by Sunday visits to their local gospel church, couldn’t help but be influenced by the first family of jazz, the Marsalis clan, not only as musicians but also as young Southerners devoted to the culture of jazz. As kids, they crammed into the kitchen to play together. Their father, a Memphis native, regularly took them home to Beale Street, where they jammed as teenagers.

When Rahsaan went to Indiana University to study music under the esteemed David Baker (who was taken by the Barbers’ “originality, depth, and maturity”), he had not yet heard A Love Supreme. Once he had, his commitment to John Coltrane shifted into overdrive. “His instrument had such a dominating authority,” he said. “I enjoyed it on an emotional level, its intensity, its investment in the moment. I also loved McCoy Tyner’s compositions and his playing.”

A towering tenor man who had a different kind of impact on Rahsaan was Stanley Turrentine. “He was so gritty, so engaging, so soulful. The same thing that grabbed me about Ray Charles’s singing grabbed me about Turrentine,” said Barber, who paid tribute to his hero on “Song for Stanley T,” recorded for the album TrioSoul (2005).

“The breadth of what he did, the range of tempos, so impressed me. His recording of [the Beatles’] ‘Can’t Buy Me Love’ was so in the pocket, so melodically soulful. As a singer’s kid, I gravitated toward melody. I loved Dexter, Mobley, Getz, all of them.”

One of only four Americans to perform at the 2003 World Saxophone Competition at the Montreux Jazz Festival, Barber plays tenor, alto, and soprano saxophones and flute on Everyday Magic. Among the highlights is the gospel-infused “Manhattan Grace,” inspired by the time he spent with a pastor and his loving family at Manhattan Grace Tabernacle while studying for his Master’s at the Manhattan School of Music.

“Innocence,” boasting a captivating stutter-step solo by Jackson and neat interplay between Barber on soprano and Agati, is a playful portrait of Barber’s niece and nephew. The groove-tight, electronically enhanced “Memphis Soul,” featuring Roland Barber and El Movimiento percussionist Giovanni Rodriguez, recalls the Barber brothers’ childhood summers in Memphis, where Rahsaan played baseball in the streets and watched pro wrestling with his grandmother.

Rahsaan takes a rare turn on flute on “Adagio,” more or less on a dare to create better meditative music for a spa than the massage music his therapist friend said sounded like “the mating calls of space aliens.” And then, memorializing the victims of the 2010 Nashville flood, are “Lost and Found,” with its mournful tenor and angelic piano cadenza by Nardone, and “Floodsong,” on which Barber’s pained cries on tenor lead with a notable lack of sentimentality into Agati’s powerful guitar reflections.

In fact, country music and jazz have had a long and mutually rewarding relationship, going back to Bob Wills and his swinging Texas Playboys and flashing forward with edgy modern players like guitarists Bill Frisell and Jerry Douglas.

“There are so many different strands of music in Nashville,” said Barber, who has played with artists ranging from Roy “Futureman” Wooten to the Temptations. “There’s a unique opportunity here to build a sound, something I was always interested in doing, whether it was like Earth Wind & Fire or John Coltrane. Just the way the horn players write horn parts and the way styles overlap.”

Barber, who has taught at Belmont University in Nashville, is among the many distinguished artists who have played with the Nashville Jazz Orchestra, an acclaimed 18-piece big band. He also has performed at the community-based Nashville Jazz Workshop, whose faculty includes smooth jazz sax star Kirk Whalum, drummer Chester Thompson (ex-Weather Report and Genesis), Chicago-schooled trumpeter Rod McGaha, and the greatly admired saxophonist Jeff Coffin, who when not leading his Mu’tet plays with the Dave Matthews Band and Bela Fleck’s Flecktones.

“Some musicians are not interested in tunes that aren’t cutting-edge,” said Barber. “They look on them as being corny. But all of us do all of it. We play with soul singers, rappers, jazz string quartets, fiddlers. You gain a way of hearing and feeling that is lost on young instrumentalists who haven't made sure all their bases are covered.”

El Movimiento (or ElMo, as it’s known) is co-led by Barber, Rodriguez, and trumpeter Imer Santiago. A septet at full strength, it has found a supportive audience for its eclectic sound, which blends Latin and mainstream jazz, hip-hop, rock, and world music. It performs mostly original compositions.

“These guys are tremendously flexible musicians,” said Barber. “I had played in several salsa and Latin jazz ensembles, on and off. I was trying to create an opportunity to play that kind of music. We got carte blanche at a club in Hermitage [a suburb of Nashville] to create a scene. As long as people came away happy, we could play what we wanted. It’s been a real joy.”

“Accessible sometimes gets a bad reputation,” he added. “But we're trying to connect with people who may never have heard this kind of music before.”

With everything he plays, Barber is telling the world there’s a lot more to Music City than country music. Next thing we know, there will be jazz night at the Grand Ole Opry, and maybe even an outbreak of polka in swinging London. • Show less

”Though he’d never make such a claim, it’s a fair statement to say that saxophonist and bandleader Rahsaan Barber is Nashville's version of Wynton Marsalis. He’s an articulate and gifted musician and soloist who doubles as the type of passionate, charismatic advocate the music desperately needs in its ongoing struggle to reach wider and younger audiences.” - Ron Wynn, The Nashville Scene

In August of 2005, Belmont University hired Rahsaan to teach the celebrated music school’s saxophone studio at the young age of twenty-five. In his work at Belmont University over the next six years, Rahsaan was promoted to full-time instructor, teaching private lessons, improvisation, ensembles and performance seminars. Currently, Rahsaan teaches a private studio featuring lessons on improvisation, arranging and practice techniques. Rahsaan is also a sought-after clinician at the collegiate level, and has been invited to present master classes by numerous music programs, including the Nashville Jazz Workshop, Tennessee State University, the University of Louisville, the University of Memphis, and the University of North Carolina.

In August of 2005, Belmont University hired Rahsaan to teach the celebrated music school’s saxophone studio at the young age of twenty-five. In his work at Belmont University over the next six years, Rahsaan was promoted to full-time instructor, teaching private lessons, improvisation, ensembles and performance seminars. Currently, Rahsaan teaches a private studio featuring lessons on improvisation, arranging and practice techniques. Rahsaan is also a sought-after clinician at the collegiate level, and has been invited to present master classes by numerous music programs, including the Nashville Jazz Workshop, Tennessee State University, the University of Louisville, the University of Memphis, and the University of North Carolina.

Rahsaan Barber currently is currently presenting a clinic entitled "Express Yourself: Pursuing Progress in the Language of Music" for all levels of serious musical student. 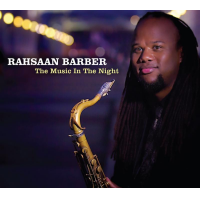 The Music In The Night 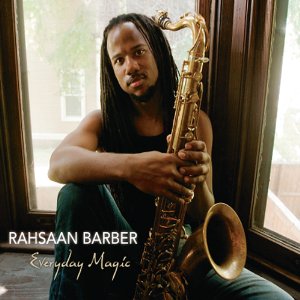 All About Jazz musician pages are maintained by musicians, publicists and trusted members like you. Interested? Tell us why you would like to improve the Rahsaan Barber musician page.