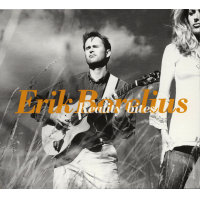 Pressrelease REALITY BITES (EB MUSIC 1997). One could state that reality bites! But you create your own reality. Mine is filled with music. When I enjoy music the most it is like a dream or a fantasy in which I travel. And because “Reality Bites” I have to – and that is probably one of the best things with my job – work hard to remain a disciplined dreamer! To me, music speaks a more clear language when it is free from verbal communication. When my mother gave me a little book with English poetry two years ago I came to think differently. This language had an intangible beauty and flowed in a way that inspired me to put music to the words. The poems focus on matters that are eternal questions for mankind! “The Minstrel-boy” by Thomas Moore (1779-1852) tells the story of the minstrel that goes to war, gets captured and chained. He tears the chords of his harp and says: “Your songs were made for the brave and free, They shall never sound in slavery”. The spirit of art can never be imprisoned! “Remember” by Christina Georgina Rossetti (1830-1894). Is about the fear of being forgotten when you reach “the silent land”. A uncompromising desire to be remembered. But it has to be happy memories. Better to forget and be happy than to remember with sadness. “Ms.SWE” – “Mother Sweden” is out of sorts. Nothing is like it was in the great old days. Silent sighs from the surrounding world when they look at Svea. Diamond clear and honest in the past, tired and worn out today. The whole world misses its guide of conscience through time and space! “Nobody Knows” – a question to everybody that believes in a god: Should you worship a being that can see all the pain and fear on the earth but despite its inexhaustible powers takes no action against it? The instrumental music is not forgotten! “2Cult” – Nordic harmonies meets Latin temper. “Mexico” – a sweaty story about six unowned horses (guitars) struggling across The Gran Desierto in northwestern Mexico. “Pacific” has a recurring theme that everything circles around and takes its energy from. Like the ocean. “Action” is a mix of tv-thriller music and hard rock. You may smile! The old villain Blofeld is back with his purring Persian cat. Three musicians helped me to create “Reality Bites”: Per Lindvall, Aare Pöder and Johan Granström. Estelle Estelle Milburne sings. She is well known from the TV-show “Knesset” and as the singer in “Cotton Club”.

All About Jazz musician pages are maintained by musicians, publicists and trusted members like you. Interested? Tell us why you would like to improve the Reality Bites musician page.