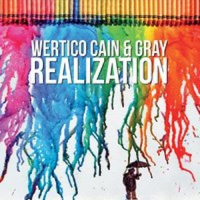 A Distorted View in a Peaceful Garden; Today I Have Seen It; Eavesdropping on a Train; To Beat or Not to Beat; Being in and Out; Life in the Modern World; That Would Be Nice; Don't Bother Me About Project Management; The Passenger in Seat 7A; All to a Certain Extent; We're Outta Here!

REALIZATION is an album that brings together worlds of styles and inspirations into moments of reality. It’s music for people who love to live an adventure through music, and dream through sound. Wertico Cain & Gray's REALIZATION was a nominee for both BEST LIVE PERFORMANCE ALBUM & BEST LONG FORM VIDEO in the 15th Annual INDEPENDENT MUSIC AWARDS (2016)

All About Jazz musician pages are maintained by musicians, publicists and trusted members like you. Interested? Tell us why you would like to improve the REALIZATION musician page.