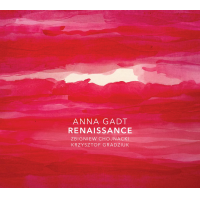 “Renaissance,” the latest release by Anna Gadt, Zbigniew Chojnacki and Krzysztof Gradziuk contains 8 pieces which nowadays represent canonical compositions of the Renaissance epoch. Psalms, liturgical songs, secular works perfectly exemplify the Renaissance world view and the attitude to the relation with God, the birth of humanism and the Reformation. Fascination of the human subject and mind as well as the focus on the unique need for dignity and unrestrained development were the reasons for creating works which prove difficult and very often surprising for modern musicians. The story told by Gadt, Chojnacki and Gradziuk appears as a deep interpretation,nevertheless, sometimes it seems to be a narrative freely inspired by compositions of that time. First and foremost, it represents a conscientious and consistent narration that aims at introducing a listener to the world of free Renaissance. The improvising musicians are facing a challenge to read the strongly defined Renaissance compositions anew and perceive them through the lens of complete freedom of expression, which is familiar for the performers. Therefore, the newly presented pieces composed by Wacław of Szamotuły (Wacław z Szamotuł), Nicolaus Cracoviensis (Mikołaj z Krakowa), Gerwazy Gorczycki, Mikołaj Gomółka, Joannis de Lublin (Jan z Lublina) are moving, stifling, sometimes alarming and intimidating, witty, tender, sensual and surely, for many, iconoclastic, appalling and controversial. Modern dissonant harmony, sonorism, different approach to musical time and space as well as original choice and use of the instruments (ACCORDION, DRUMS, VOICE) make the translation of Renaissance reality into modern performative language possible. The material offered to the audience is a snapshot of the recording studio events. No corrections and improvements. This is a picture which exemplifies “the here and now” of two days spent in Tokarnia Studio, owned by Jan Smoczyński. The album contains 3 improvised pieces which were spontaneously recorded during the studio session and two compositions by Anna Gadt. “Silva Rerum,” written for a trio, in which accordion evokes the role of pipe organs, brings peace and mysticism. Second piece – “Thank You,” a tribute to Barry Guy, is a dialogue of three instruments which turns into a homogeneous song of praise for distinctiveness and freedom.

All About Jazz musician pages are maintained by musicians, publicists and trusted members like you. Interested? Tell us why you would like to improve the Renaissance musician page.