Check out the latest awards ceremony for independent music and you'll likely find Reverend Zen named among the nominees or winners. Since the release of their debut CD the rock, blues, jazz group has continuously garnered critical acclaim, receiving fifty-two music industry awards from around the world. John Schoenberger of Billboard's Radio and Records in Los Angeles reflects on the band's success stating, “Reverend Zen's Angels, Blues & the Crying Moon is simply a very good record.”

Winning 2007/08 Song of the Year from ABC Radio Networks Fame Games Effigy Awards in Costa del Sol, Spain for “The Boston Shakedown,” along with five Finalist Awards, is just a start. An Artist of the Year Nomination and seven Finalist Awards for “Bad Attitude,” “Don't Try to Tell Me,” “My Sigmund Freud,” “Her Love,” “Dangerous Times,” “Boy Genius” and “The One in Love” followed from 2008/09's Effigy Awards. Two thousand seven saw Reverend Zen receive four Best Song Nominations from Hollywood's Los Angeles Music Awards for “The Boston Shakedown,” “Bad Attitude,” “Don't Try to Tell Me” and “Dangerous Times.” The genre stretching band was subsequently named L.A. Music Award's 2007 Artist of the Year, with “Bad Attitude” named 2007 Song of the Year

In 2008 and 2009 Reverend Zen bandleader-songwriter Jack Evans was the recipient of two prestigious ASCAP Plus Awards in New York. Preceding those honors, the group received five Runners Up Awards in 2006's VH1 Song of the Year Contest in Houston, as “Dangerous Times” was named a 2006-VH1 Finalist. The VH1 panel remarked, “Listening to these songs you're drawn in by their unique, vivid mirrors of human nature and emotion. Their lyrics and arrangements have the power to make you remember both the songs and their performances. This music has stand out guitar that's perfectly executed and first rate production. Above all this music is straight from the heart.”

For Reverend Zen such substance and precision were honed over time, with the band writing and recording Angels, Blues & the Crying Moon over a ten-year period. You'll hear this dedication and attention to detail in each exacting lyric and every well-executed chord change. “Great songwriting, lyrics and arrangements from Reverend Zen.” Comments Paul Olund of MSNBC.com's Independent Study--Artists You Need to Know. These are always timeless qualities in music and Reverend Zen not only reminds us of Steely Dan's cleverness and the grit of the blues, but they also touch upon the introspection of the singer-songwriters. These traits and more are evident on the group's slamming shuffle “The Boston Shakedown,” with its tale of lust, debauchery and a college education, and in the dark beauty of love lost on “Don't Try to Tell Me” and “The One in Love.”

Reverend Zen's musical credentials are beyond question. The group's musicians have a history of playing with the music greats, ranging from John Mayer, Eric Clapton, Bruce Springsteen, Sheryl Crow, Donald Fagen, John Scofield and Annie Lennox to B.B. King, Stevie Wonder, Aretha Franklin and Sting. The band's sound pays tribute to these influences, but also pushes musical boundaries mixing the funk laden wit of “Bad Attitude” and “Boy Genius,” with the classic rock sound of “Magdalena” and its angelic tale of love found.

“Our influences span several genres.” States Mr. Evans. “Miles Davis, James Brown, Joni Mitchell, Steely Dan, Wayne Shorter and Claude Debussy is among our favorites. All of them inspire us with their spirit, eloquence and craft. They just seem to express themselves with conviction and humanity..” Strands of Ms. Mitchell and Mr. Debussy can be heard flowing through Reverend Zen's impressionistic ballad of love in question, “Only a Fool” with the New York group again bridging musical idioms.

Such rich musical backgrounds coupled with their distinctive writing has helped Reverend Zen quickly gain a reputation for thought-provoking lyrics and no holds barred rhythms. Those qualities and more are evident on the rocking “My Sigmund Freud,” their National Inquirer like adventures of an amusing psychotic and his psychiatrist, on “Her Love” their haunting portrait of a woman's emotional damage and on “Dangerous Times” their analogy of the Wild West to current events in America and the world. It's music for the thinking man's head indeed.

Not only the music industry, but listeners around the world are discovering Reverend Zen with the band receiving airplay and coverage in North and South America, the Middle East, Australia, Japan and Europe. Paul Sedowski, CEO of Meer Music International's Fame Games show, broadcast on Spain's Onda Cero Radio Network to audiences in the United Kingdom, Canada and Australia, and in the United States on the ABC Radio Network remarks, “Reverend Zen has gone and rocked our station totally and put big smiles on our faces. They sound like a killer band that's tight, full of energy and swing, highly accomplished and credible.”

Global platitudes aside Reverend Zen's true genius lies in its music with lyrics of wit, introspection and cultural commentary, melodies that live on in your memory like old friends, dead on drum tracks, bad ass guitar solos and subtleties that slowly reveal themselves. Ten years in the making, Angels, Blues & the Crying Moon was worth the wait and is now taking Reverend Zen to the world stage.

With a Mix of Rock, Jazz and Blues, Reverend Zen Wins Artist of the... 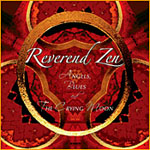 Angels, Blues and the...

All About Jazz musician pages are maintained by musicians, publicists and trusted members like you. Interested? Tell us why you would like to improve the George Braith musician page.